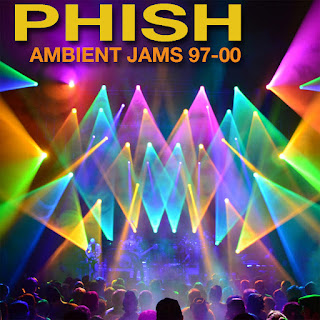 I've given up trying to win non-believers over to the Phish cause. I'm the first to recognize that they are a particularly cultish band. Whether it's the eclectic nature of their recorded work (particularly their more prog/Zappa-esque early work, which surprises some who expect more laid-back user-friendly Grateful Dead-ish vibes), or the in-joke weirdness of their live shows (vacuum cleaner solos; trampolines; setlists that range from trippy 30-minute jams to pithy bluegrass standards to unexpected cover songs; or--as they played last night--a show whose setlist includes only songs with numbers in the title, in descending order!), they can be a challenge for those who attempt to enter the Phish universe without a helpful guide (or a Helping Phriendly Book). Not that some haven't tried and succeeded; check out a Pitchfork critic's description of his conversion from earlier this week.

All that said... I've decided to share a home-made mix of instrumental jams from the band. I don't think you need to be a fan of the band to appreciate a couple hours of trippy background music to get you through your day. This particular mix (a double-CDR collection) focuses on jams from the tail end of Phish 1.0 (preceding a lengthy sabbatical), a time when the band's live shows were increasingly experimental affairs. I've edited out all the underlying songs, so all you have are the instrumental jam segments, segued together. It's mostly on the ambient side, quiet and atmospheric and perfect for zoning out, though there are some more upbeat segments mixed in to prevent this from going too far into Eno territory. 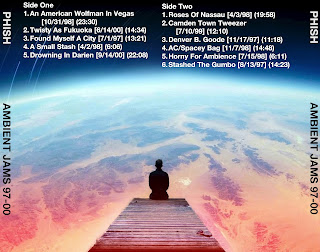 I've broken this into 2 separate downloads; all you need to do is unzip them, move them into your digital library, and enjoy. Give it a shot, you might be surprised. (Note that the downloads will expire at some point, so it's now or never!)

Here's the performance of the lead-off jam, arguably their most deep-space ambient exploration to date, from the Halloween 1998 performance of "Wolfman's Brother" (starting about 6:50 into the song):

...and here's their performance of "Roses Are Free" (a Ween cover) from their 4/3/98 Nassau show, which leads off Disc Two of my mix, with the jam really kicking in around 13:00 into the song:
File Under: 1990s Ambient Bootlegs Instrumentals Jam Band Live Music Mixtapes Phish Psychedelia