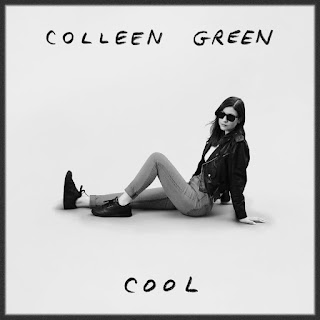 Here's another new release I've been getting into. Massachusetts-based musician Colleen Green had a couple earlier albums of mostly lo-fi indie pop-punk, quirky and fun; but her new one adds a little more sonic and songwriting sophistication--still a home-brewed affair with Green apparently playing pretty much everything, but polished enough to make it more approachable. It's hard to nail down exactly what it sounds like: I hear touches of 80s new wave like Missing Persons, 90s indie pop-rock like Letters to Cleo/Kay Hanley, and of course innovative singer-songwriters like Liz Phair and Juliana Hatfield.

There's some relatively straightforward buzzy guitar pop here, just twisted enough to avoid falling into the trap of comfortably familiar hooks (the infectious opener "Someone Else," the punchy "It's Nice To Be Nice," the Stooges updating of "I Wanna Be A Dog"). The terrific "How Much Should You Love A Husband" blends Phair and girl-group pop and turns it into amped-up power pop, while the hushed "Highway" feels almost like Sleater-Kinney cooling down after a late night. Her vocals are deceptively sweet, whispered come-ons with a hint of snark.

At barely half an hour (including a provocatively titled instrumental to close things out), it's almost more EP than LP, Green checking in just long enough to lay down some unpredictable tunes; but its brevity also invites you to give it a second spin to pick up on some subtle touches.

Pick it up on Bandcamp.

Here's the video for "It's Nice To Be Nice":