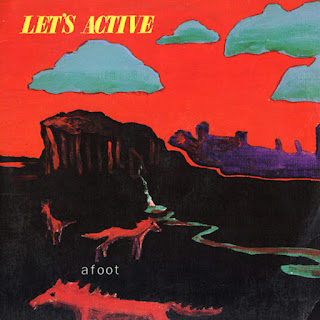 Let's Active were the 80s-era band of production wunderkind Mitch Easter. Easter is probably best known for his work behind the boards on R.E.M.'s jaw-dropping early run (Chronic Town/Murmur/Reckoning) as well as a series of Game Theory albums and the Connells' spectacular Boylan Heights. He continues to produce myriad bands (including helping out on Pavement's Brighten The Corners).

His own band was a blend of 80s college radio jangle pop and quirky treble-happy power pop, most closely aligned with the early dB's. The debut EP, while sporting the telltale jangly guitars, rested partially in the jagged new wave camp. It's highlighted by the wondrous "Every Word Means No," one of the era's definitive pop tracks that really should've been a crossover radio hit in a just world. For the CD release, it was paired with the follow-up long-player, 1984's Cypress, which largely stuck to the same template. (Album standout: the like-minded "Blue Line.")

Let's Active released a few more albums before calling it a day: 1986's similar-sounding (and no less great) Big Plans For Everybody, and 1988's denser, mainstream-courting (unsuccessfully, alas) Every Dog Has Its Day. Aside from a brief reunion, Easter has largely stuck to producing, though he's contributed to any number of other artists, including working with the terrific indie pop act Orange Humble Band, a personal favorite.

Oddly, only random tracks from Afoot & Cypress stream, though you can hear the entirety of the latter two records on Spotify.

You can hear a rip of Afoot on YouTube.

Here's the video for "Every Word Means No":

...and an audio rip of "Room With A View" (backed by someone's road trip home video):