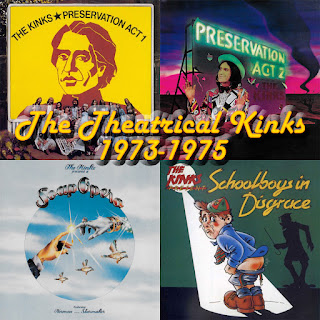 The run of Kinks albums from 1966 to 1971 was a marvel to behold. You had the post-British-Invasion pop masterpiece Something Else, the stripped down pastoral slice-of-life Village Green Preservation Society, the rocking yet nuanced concept albums Arthur and Lola, and the humble Americana of Muswell Hillbillies. But by the early 70s, Ray Davies was ready to take his broadly thematic rock operas to a new level of theatricality, music tied to more explicit narratives and increasing reliance on showtune stylings. And boy, it was a real mess.

The transition arguably started with 1972's Everybody's In Showbiz, a selection of songs working the "life on the road" trope, and while there was a bit of kitsch, the songs still largely stood on their own independent of the overarching theme. Plus it included some of Davies' best songs, the Hollywood ode "Celluloid Heroes" and chipper "Here Comes Yet Another Day" and the moving ballad "Sitting In My Hotel." Toss in the bonus disc of live music, and Showbiz is still pretty damn solid. 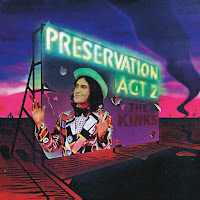 But in 1973, Davies kicked off his two-part Preservation saga, a sprawling set of music clearly geared more toward a theatrical production than a rock & roll album. It's the tale (I think) of a battle between a greedy real estate developer and a moralist preacher for the soul of a small town, complete with walk-on parts for the local prostitutes, hobos, and used-car salesman. Or some such nonsense. And who knows, as a Broadway musical it might have been a delightful change of pace (indeed, based on live bootlegs from the era, the music is a lot more entertaining presented live). But on record, it's a bit of a snoozefest.

Preservation Act 1, to be fair, is at least half a pretty great album. "Sweet Lady Genevieve" deserves a place in the shortlist of the band's greatest songs; "Where Are They Now" is another terrific Davies ballad lamenting times past; even "Sitting In The Midday Sun," perhaps a tad too sweet, conjures the modest joys of Davies' Village Green-era work. And some of the more expositional tracks, like "Here Comes Flash" and "Demolition," manage to tether their storytelling to fun pop tunes. But a few tracks sound more like the work of an amateur theater troupe.

Here's a video for "Sitting in the Midday Sun":

If Act 1 at least tried to strike a balance between rock and theater, 1974's Preservation Act 2 sees Davies going fully off the rails. It's a pretty straight-out narrative, the songs introducing characters and plot points (picking up from where the prior disc left off), interrupted by spoken-word "announcements" reminding us that it's a play, not a rock album. And while Ray's embrace of Vaudeville music, with the horns and guest female vocalists and vignettes and old-timey music, had made some appearances on Muswell and Showbiz, here it's pervasive, a rock album in only the loosest sense. All of which I might be willing to accept if there were some great songs like those on Act 1, but there really aren't. If you're compiling a Kinks greatest hits album, even one composed solely of '70s tracks, you'd be hard-pressed to come up with any selections from this double-LP. Maybe "Salvation Road," a more straightforward rocker (though it's a bit of a cheat, reprising some of the music from Act 1); but otherwise, even passable highlights like "Mirror of Love" and "He's Evil" don't really work outside the context of the record.

Here's part of a 1975 concert, including a few Preservation-era tracks:

After the career nadir of Preservation Act 2 (not counting a few forgettable records at the end of their '90s run), 1975's Soap Opera bounces back, just slightly. Thematically, it's every bit as shaky as Preservation, a loose narrative about a rock star who decides to become Norman, a 9-to-5 suburban husband living the most banal of ordinary lives. Not exactly killer rock opera material. But at least it's more listenable musically, with some actual rock songs. It's still better suited to a live presentation--bootlegs and some concert video make it seem almost interesting--but at least it (sometimes) rocks. "Everybody's A Star" is slight but catchy, Dave Davies' 1960s power chords finally resurfacing after a half-decade break; "Ducks on the Wall" is somewhat ridiculous lyrically, mocking the protagonist's wife's taste in wall decor, but slightly deranged fun; and "Have Another Drink," embracing after-work alcoholism as the flip-side of Muswell's demon "Alcohol" cautionary tale (and revising that record's "Have A Cuppa Tea"), is an infectious singalong once you get past the off-putting sentiment. There are a few between-song spoken-word narratives, best edited out, but much less so than Preservation Act 2. I'd say this one has grown on me over time, deeply flawed but amusing.

Davies capped this run later that same year with Schoolboys In Disgrace. The spoken-word bits and showtune-heavy sound are gone, and while there's still some storytelling going on--this time an ode to youthful school days--it's much less intrusive and the songs can stand up on their own. And musically it's a good old-fashioned rock & roll album, with some harder-rocking tunes that preview the concept-free guitar-driven classic rock albums that would follow. It sports an all-time great in "The Hard Way," a three-power-chord wallop that reclaims the band's classic '60s singles (arguably filched by the Who's "Can't Explain"). "No More Looking Back" is a nifty bit of seventies middle-of-the-road songwriting that serves as a nice warm-up for later albums like Sleepwalker and Misfits. Alas, much of the balance, for all its back-to-basics sound, makes the mistake of being... well, rather dull. A few tracks are perfectly fine--"Jack The Idiot Dunce" is another silly one in the "Ducks On The Wall" mold--but, for all one's joy in finding the heavy plotting of Preservation and Soap Opera left behind, much of the music feels a little flat and lacking inspiration.

After this musical run, Ray would abandon his long attraction to theatricality (aside from a few later solo albums); from there on, Kinks records were simply collections of songs (and, at least in the case of their late '70s and early '80s albums, a surprising number of pretty great songs at that).

Anyway, while the music on those four mid-'70s concept albums doesn't always work freed of the overriding narratives, I tried my hand at compiling a mix that cherry-picks the best songs and scatters their ordering, so it sounds almost like... well, like a basic rock & roll album. Give it a spin and see what you think.