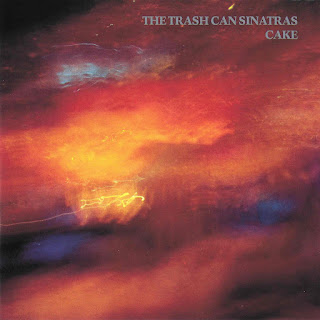 Scotland's Trash Can Sinatras (sometimes also referred to as the Trashcan Sinatras) are a long-running jangly pop band, with songs full of wistful melodies and gentle harmonies; their quirky wordsmithery makes them particularly appealing for an afternoon on the couch with the lyric sheet. Some of their music suggests a blend of the Smiths and countrymates Teenage Fanclub, or maybe a bit of the Lilac Time (another fave of mine). I got some flack on Twitter for calling them "perfectly solid early Britpop," which I suppose isn't entirely apt, though we Americans tend to view anything vaguely Beatlesque coming out of the the UK in the 90s as Britpop.

Their 1990 debut offered a blend of catchy mid-tempo pop and some more languid balladry. It's highlighted by a pair of killer tunes--"Obscurity Knocks" is delightfully infectious, chiming guitars and an anthemic, soaring chorus; and "Only Tongue Can Tell" is... well, same thing, nearly as great. A few other tunes are similarly upbeat (i.e. "Circling The Circumference"), while the balance kinda drifts off into the background, less immediately striking but never less than pleasant.

Subsequent albums didn't veer too far afield from the blueprint established by Cake, each record reliably providing a few noteworthy tunes interspersed with gentle ballads. Their most recent release, 2016's Wild Pendulum, remained as lovely as any of its predecessors (while including one of their finest pop songs to date in the rousing "Ain't That Something").

Here's the video for "Obscurity Knocks":

Here's a live, acoustic performance of "Tongue" from a few years back, simply gorgeous: