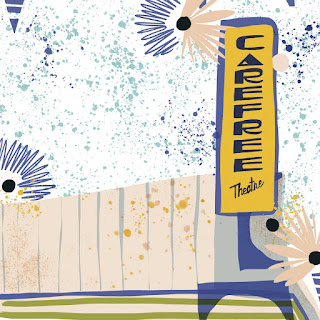 Surfer Blood are one of my favorite bands of the past decade, quietly releasing chipper and consistently reliable records that encapsulate the Noise Pop genre, hook-laden earworm pop nuggets with a hint of fizzy distortion to keep them grounded. You can probably lump them in alongside other great bands who have waded into the Jesus and Mary Chain sandbox, though with perkier tunes and much of the feedback cast aside (particularly relative to some of their earlier work, with the intermittently distorted guitars largely replaced by a gentler twang).

Their latest release, Carefree Theatre, landed just last week. It doesn't stray far from the blueprint established by their half-dozen or so prior albums, singer John Paul Pitts laying his boyish vox over some pithy tunes that dig in their hooks and quickly move along to the next one. Opener "Dessert Island" leads with a slow, distorted bassline that suggests a more garage-oriented album in the vein of New Zealand indie rockers like the Clean, before launching into a typically buoyant chorus. (Later on, "Uneasy Rider" again locks in on a similar NZ vibe.) "Karen" picks things up, fizzy hum-along pop with a hint of Weezer. While terrifically engaging throughout, the stand-out for me is "Parkland (Into the Silence)," a driving riff backing a cathartic shout-out to the kids who rose above the tragic school shooting (not far from where the Florida-based band grew up) to make their voices heard. Amazing stuff. The album closes out with "Rose Bowl," a gorgeous bit of mid-tempo jangle that finds them somewhere between Brian Wilson and bands like Real Estate, light and ingratiating save for a blast of distortion at the end.

I've just had this a couple days, but it's quickly risen to one of my favorite releases of 2020. Check it out at Bandcamp (and while you're there, take a look at last year's wonderfully fun Covers album, with the band paying tribute to everyone from Pavement to Liz Phair, not to mention a great take on Modern English's "I Melt With You").

Here's the lyric video for "Parkland":