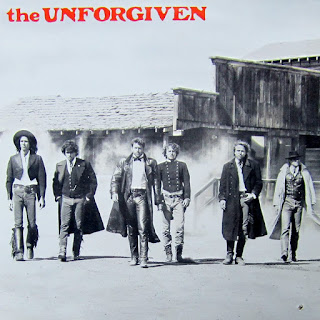 I suppose this is another one from the Guilty Pleasures file. I know, I know, we should wholeheartedly embrace what we enjoy without guilt regardless of critical assessments, but, still, definitely feeling guilty about this one. Because it was pretty damn hokey even when it came out, and it hasn't aged well. But I got such a kick out of it back in my college DJ days that it's hard not to feel a little smile coming on when I dust it off every few years, however cringe-inducing it may be.

The L.A. based band managed just one album before disappearing, combining the Americana sound and Western themes of college radio bands like the Long Ryders with self-indulgent instant anthems (see also, e.g., The Alarm or, ugh, Bon Jovi), foisting boomy join-our-gang proclamations into seemingly every chorus. Which makes the album both silly and embarrassingly cathartic if nobody's looking.

Hey, you've gotta respect the band's commitment, from the Western movie costumes to the concept-album-like consistency of the lyrical themes, even if the effect is far more, say, Emilio Estevez in Young Guns than Clint Eastwood in The Good, the Bad, and the Ugly.

Opener "All Is Quiet On The Western Front" is undeniably catchy, bridging respectable Americana-pop with an MTV-ready sheen. "Hang 'em High," "I Hear The Call", and "With My Boots On" all capture the over-the-top Western gang schtick, with the feel-good glam of Slade or some pop metal band driving the beat. The kitsch wears thin over the course of an entire LP (ok, maybe by the time you've made it part-way through the first song), but, again, you've gotta tip your hat to them for carrying it all the way through.

(Always kinda wondered if the Killers were ripping them off on "All These Things I've Done.")

Here's the video for "I Hear The Call":