Nick Mason's Saucerful of Secrets: Live at the Roundhouse (2020) 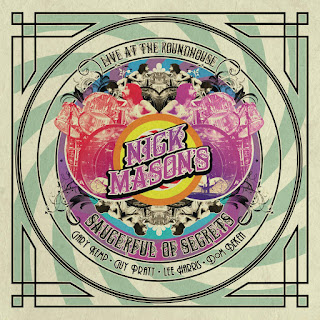 Yes, I appreciate the anomaly of buying a live album from a tribute band, when there is plenty of music available from the real thing. (I say this as the proud owner of countless live shows from Joe Russo's Almost Dead and other touring bands that recreate the live Dead experience.) And while Saucerful of Secrets is helmed by original Pink Floyd drummer Nick Mason, it's essentially a pick-up band of musicians playing Floyd songs. But so what. I saw the show when it hit San Francisco last year, and it was one of the best times I'd had at a concert in quite awhile. And now I can upgrade my unofficial recording of the show with a clean, shiny, official document, a newly-released DVD/CD of one of last year's UK shows (and since the setlist was largely unvarying over the course of the tour, with little improv, there's not much need for more than one).

The main appeal of the concert (and this recording) is that Mason opted to draw the setlist entirely from the band's early, pre-Dark Side of the Moon years, a pretty huge chunk of which the real Pink Floyd never played live. So there's a blend of Syd Barrett-era whimsical pop and trippier psychedelia, as well as the varied music from the immediate post-Barrett era. The band thus avoided duplicating the playlists of successful Floyd tribute acts like Brit Floyd and the Australian Pink Floyd, both of which tend to favor material from the classic 70s run of Dark Side through The Wall (as well as some later post-Waters material and a few stray earlier tunes).

Vocal duties are shared by bassist Guy Pratt (who'd supported both Waters and Gilmour solo tours over the years) and guitarist Andy Kemp (former frontman for mellow new wave band Spandau Ballet who later pursued an acting career). Both are perfectly fine, fortunately not working overtime to imitate Barrett or Gilmour/Waters. The arrangements are pretty faithful to the originals, without much improv (when I saw them, there was a pretty long instrumental jam leading into the first track, but that's sadly cut from the CD release). Aside from the odd insertion of an abbreviated "Atom Heart Mother" suite between verses of "If," and the amusing if distracting invocation of the Sex Pistols during "Nile Song," it's pretty by-the-book. But for me, the fun is in hearing a lot of my favorite Floyd tunes that I never dreamed I'd hear live, like the wonderful "Fearless" from Meddle and "Childhood's End" from Obscured by Clouds, not to mention plenty of Barrett greats like "Lucifer Sam" and "See Emily Play" and "Bike" and even the until-recently-officially-unreleased "Vegetable Man."

"See Emily Play":"One Of These Days":