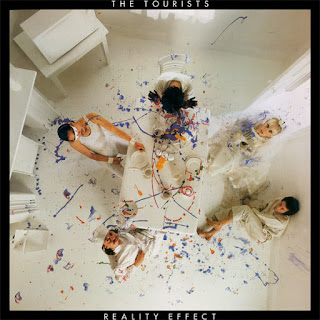 The Tourists were a late 70s UK band who released 3 LPs of somewhat generic but intermittently catchy new wave/power pop, all long out-of-print and unavailable on streaming media (at least here in the US) (though you can track down a pretty exhaustive Greatest Hits collection on CD, pretty much all you'd really need).

I don't think they enjoyed any chart success here in the States, and presumably they'd be mostly just a footnote today but for the presence of a couple interesting members -- Annie Lennox on vocals and Dave Stewart on guitar. Yeah, the guys who'd later become The Eurythmics and make a shit-ton of money at the dawn of the MTV age.

Stripped of the curiosity factor of seeing Lennox/Stewart in an early incarnation, would the Tourists be worth a mention? Maybe. They weren't bad. As I said, a little generic, but fun enough. Lennox splits vocal duties with primary singer-songwriter Peet Coombes, taking lead on a few tracks and otherwise providing harmonies, but she definitely gets your attention when she steps to the mic (visually, at the very least). 1979's eponymous debut is ok, a little nondescript, but for the second and better album later that year, Coombes wisely gave Lennox a little more time at the mic (while retaining songwriting duties). It's a little brighter and more upbeat as well, mostly guitar-based pop with some obligatory new wave synths.

Here's the video for the single, "So Good To Be Back Home Again." Pretty catchy, right?
Yeah, that one's pretty good. Let's listen again, different video:
The album also includes a kinda by-the-book, slightly new wave take on 60s chestnut "I Only Wanna Be With You" (probably still best remembered in its Bay City Rollers incarnation):
Here's an audio rip of "Circular Fever":
...and an audio rip of "Everywhere You Look":
And as long as we're here, check out the quirky "Don't Say I Told You So," from their third and final album, 1980's Luminous Basement.