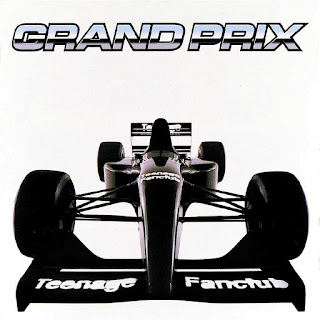 As noted earlier, I was pretty demolished by Teenage Fanclub's second album, Bandwagonesque, a stunning power pop stand-out that matched Big Star's melodic jangles with judicious use of the distortion petal. But it turned out to be just the first in a series of no less melodic, but increasingly clean-sounding killer pop records. I loved 1993's Thirteen, which left the Bandwagonesque formula largely intact (and may very well have the highest quotient of insanely hooky tunes of all their albums); but it's the next one, 1995's Grand Prix, that probably gets the most play-time for me these days.

Sanding off most of the fuzzbox edge, Grand Prix leaves just the shiny pop nuggets, chiming and ringing and left to claw for your attention without the alt.rock guitar catharsis. Which they pull off in spades.

Opener "About You" is one of those mid-tempo tunes that by this time the Fanclub seemed capable of writing in their sleep, a gentle verse and an earworm hook in the chorus. But it's the next track, "Sparky's Dream," which for me is pretty much the peak of 90s power pop; if there's been a more relentlessly infectious hook since then, I have yet to find it. The chorus harmonies are simply... damn, no words. Just amazing.

And if nothing on the rest album reaches "Sparky's" heights, there is no shortage of memorable hum-along tunes. "Neil Jung" is another slowed down, midtempo wash of harmonies that worms its way into your head; "Discolite" similarly slips from a pleasant enough verse into a harmony-rich chorus that sucks you in; "Verisimilitude" gets by on an understated jangle that somehow remains captivating. As on all their best work, the band's three songwriters/vocalists trade off turns in the spotlight, providing a bit of variety (yet all aligned enough in sensibility that you can't really tell who's responsible for each song without the liner notes).

While lacking some of the edge of the prior two records, with a few slower tunes that kinda get lost amidst the big hooks (something that would increasingly make later records a bit more inconsistent), it's never less than pleasant, offering gentle ballads to complement the riveting highs.