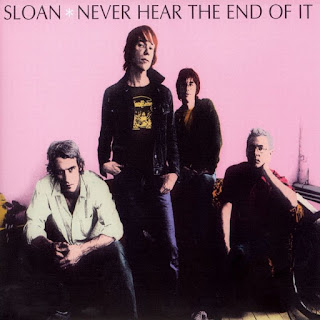 Canadian power pop band Sloan have been plugging away for over a quarter-century (their twelfth album, entitled simply 12, came out in 2018), yet don't appear to have ever gotten much traction in the US. Which is a shame, because they've got a ton of hook-filled, guitar-based, crunchy pop-rock in the bin, ideal for anyone who likes the Odds, Cheap Trick, the Posies, the New Pornographers, and Fountains of Wayne.

As is often the case with bands hovering around the genre, some of their music works best as stand-alone singles than over the course of an album (I've got a pretty killer home-made 2-CD collection I really need to recreate on Spotify and post over on my mix page).

But one album of theirs I really love from start to finish is Never Hear The End Of It (released in Canada in 2006, but hitting the States in early '07). With 30 songs in about 75 minutes, it's their Guided by Voices record, a relentless barrage of tunes, some fully-formed, some barely snippets, hitting the hook and moving on to the next one. It covers all the bases of their sound, from earworm power pop that sticks in your head to midtempo sing-along ballads to crunchier classic rock radio-ready anthems. And for all its throw-it-against-the-wall-and-see-what-sticks approach, the hit-to-miss ratio is pretty damn high.

Way too many songs to cherry-pick the standouts, but you know what you're in for right off the bat, from the blink-and-it's-over opening proclamation "Flying High Again" to the rollicking bluster of "Who Taught You To Live Like That?" to the quirky, layered, glammed-up "I've Gotta Try" in the first 6 minutes alone. Sure, there are the occasional off-beat experiments that don't amount to a whole lot, but then you've got the stunning Badfinger-esque pop majesty of "Can't You Figure It Out?" to more than compensate.

There's a lot of great Sloan music to choose from, but this is a pretty damn impressive starting point.

Here's a live "Who Taught You To Live Like That?":
Here's the video for "Someone I Can Be True With":
Here's "Before The End Of The Race," with fireworks:

Here's an audio rip of "Can't You Figure It Out?":
File Under: 2000s Indie Rock Power Pop Sloan