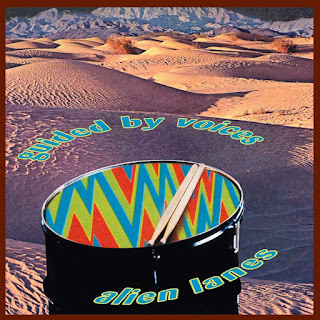 Having already rambled on about Guided by Voices' 1994 masterpiece Bee Thousand, I won't add much here: the following year's Alien Lanes simply repeated the formula, mixing some of the most infectious indie pop songs you could ever conjure amidst fistfuls of noisy dross and bare sketches of songs, the weaker tracks -- typically less than a minute, not worth the effort to hit the "skip" button -- making the winners all that much more powerful.

The two releases are really of a piece, both casually recorded lo-fi blueprints for an imaginary finished work that avid music fans will simply construct in their head, saving Robert Pollard (abetted again here by pop wunderkind Tobin Sprout) the trouble of booking more studio time.

As is the case for all of GbV and Pollard's irrationally prolific career, a judicious editor would simply hold back on the non-stop releases, cobbling the best tunes from every 3 or 4 records into a killer album. Editing the best tracks from Bee Thousand and Alien Lanes into a single disc would, of course, be stunning. But that's not the universe where Pollard resides.

Anyway, personal high points here include low-key opening anthem "A Salty Salute," quietly effervescent pop gems like "As We Go Up, We Go Down" and "Blimps Go 90," and relentlessly infectious rockers like "Game of Pricks," "Closer You Are," "Motor Away," "My Valuable Hunting Knife," and Sprout's "A Good Flying Bird." That leaves 20 more songs to weave through, of highly varying quality, but plenty of transcendent moments for the diligent.

Here's the video for "Motor Away" (with "Auditorium" lead-in):How about an audio rip (with lyrics) of "Blimps Go 90"?Here's a live "Game of Pricks":
File Under: 1990s Guided By Voices Indie Rock Lo-Fi