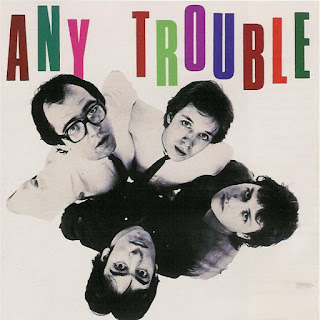 Any Trouble were an on-again, off-again UK band that recorded a half-dozen or so albums over the years, mostly new-wave pop with some blue-eyed R&B strains. I've always been surprised that their 1980 debut didn't get more traction. It fits in squarely with the first couple Joe Jackson albums, maybe some early Elvis Costello and bursts of Nick Lowe and Squeeze. Loads of great songs, bouncy pop with catchy hooks and the occasional ska or soul flourish; maybe lacking the killer single like "Is She Really Going Out With Him" or "(The Angels Wanna Wear My) Red Shoes," but impossible not to like. There was plenty of great material on later work as well, right up through 2015's endearing reunion effort Present Tense, but you can't go wrong checking this one out.

Here's the video for "Second Choice":

And "Get You Off The Hook":
File Under: 1980s Any Trouble New Wave Power Pop