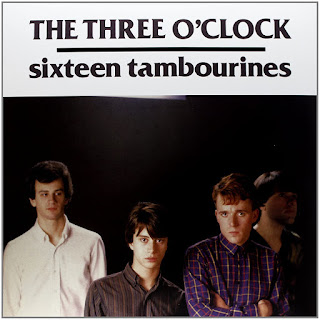 The Three O'Clock were part of the California Paisley Underground scene of the early/mid-80s, with updated Byrds-influenced jangly psychedelia, not far afield from fellow scenesters the Rain Parade. They had a few albums (including an early release while they were still called the Salvation Army, which they were forced to change for obvious reasons) full of jittery pop songs, intricately styled hooks that leaned to the baroque. They could also be a bit divisive; for all their shimmering pop sounds, they were way over on the treble side of the sonic spectrum, vocalist Michael Quercio employing a near-falsetto tenor which, joined by the thin guitars and occasional keyboards, could be a little too off-putting for some. I'm able to get past it and enjoy the tunefully melodic music, but tend to prefer them in smaller doses.

Lead-off single "Jet Fighter" offers a joyous power pop chorus surrounded by gentle wafts of brittle new wavey synths, reminiscent of like-minded indie poppers Game Theory (who Quercio would briefly join after the Three O'Clock disbanded); the next track, "Stupid Einstein," is lighter fare, deeper into the jangle, Quercio almost wading into Geddy Lee territory. "And So We Run," like "Jet Fighter," alternates between complex verses and catchy choruses, while "Fall To The Ground" is a bouncy, piano-driven Beatlesque gem with shades of latter-day XTC. And so on -- sophisticated pop that works if you don't lament the lack of sonic oomph.

Get past the crisp upper register of the album and there's a lot of sunshine to be mined here.

Power pop maestro Jason Falkner joined them briefly near the end of their run, but they broke up in '88, reuniting a few years back for some live gigs and the awesome Paisley Underground project 3x4, a 2018 album in which they, alongside the Bangles, Rain Parade, and Dream Syndicate, covered each other's songs.