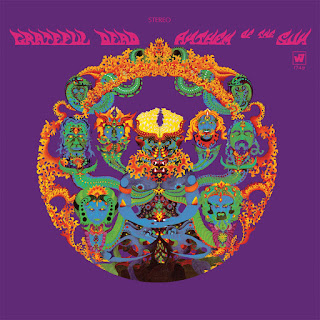 I've written previously about how my initial antipathy towards the Dead switched in the blink of an eye to a lifelong passion for the band. (An excerpt from my book talking about my Dead epiphany can be found here.) One factor in my initial disdain for the band stemmed from my disappointment at the almost straightforward normalcy of their music. When I first heard about the band as a pre-teen first discovering rock music, I'd understood them to be a DRUG BAND, and while I didn't know exactly what that meant, I assumed their music would be weird and trippy and experimental, which made it something of a comedown when I started exploring their radio "hits" and heard songs like "Truckin'" and "Casey Jones" and "Uncle John's Band," their blend of rock and country and folk surprisingly... conventional.

My response might have been different if the local public library, my source of new music back in the days before my allowance accommodated actual record purchases, had stocked 1968's Anthem of the Sun rather than the basic greatest hits collection. Because of all their "studio" albums (more on that in a second), Anthem is indisputably the most psychedelic and sonically adventurous, much more in line with the weirdness I'd hoped to find when I first checked them out. (1969s Live Dead, not to mention pretty much any of their archived shows from their pre-70s psychedelic period, would have done the same, but I didn't have access to those at the time, either.)

Anthem is an interesting recording, a hybrid weaving together studio and live recordings, resulting in a blissfully disorienting mix that at times has the pristine aesthetic of a studio recording while at other times devolving into a chaotic, layered blend of multiple live performances. Even aside from the sound, the songs (at least on side one) are much more deliberately "psychedelic" than on the more garage-rock-sounding, amphetamine-paced debut from a year prior. "That's It For The Other One" is a multi-part suite, bookended by a melodic Jerry Garcia-helmed ballad with a rollicking Bob Weir rocker tucked into the middle, a striking piece that was a reliable live showstopper right up until the end (though after a few years they largely dropped the Garcia sections, while elongated the Weir section into a jam-friendly monster). The song dissipates into a haze of feedback, with another extended piece, "New Potato Caboose," emerging from the din; it, too, is a trippy, drugged out opus (though, sadly, one that only endured for a couple years in the live repertoire). The album side closes with the pithy, almost poppy Weir number "Born Cross-Eyed," a chaotic slash-and-burn head trip (and the song that, according to legend, led to the label-supplied producer storming out of the sessions when Weir demanded he capture the sound of "thick air").

The vinyl's second side has only two songs, both fronted by the band's resident bluesman Pigpen: "Alligator" is a fairly straightforward blues-rock tune, a nifty riff followed by one of the better jams captured on a studio (ish) Dead album); "Caution" is a Pigpen vocal vamp seguing into an extended feedback workout, definitely diehards only (though displaying the band's more free-form, often underappreciated sonic experimentation).

The album was reissued in 1972 with a slightly altered mix. Unlike the follow-up album, 1969's Aoxomoxoa, which similarly circulated in two different mixes, I find the differences here to be more subtle, though I prefer the slightly messier and more chaotic original version. A recent anniversary edition included both mixes, so you can obsessively cross-reference to your heart's delight.

...and a video clip for "New Potato Caboose":