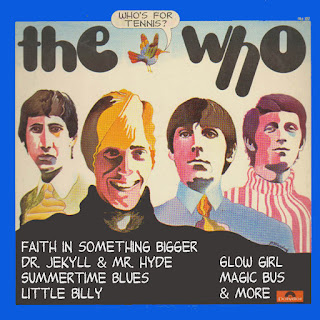 In the pantheon of Great Lost Albums--Neil Young's Chrome Dreams, The Beach Boys' Smile, the Velvet Underground's 4th Album--the unreleased/imaginary Who's For Tennis is mostly a small blip, certainly eclipsed by the band's other lost opus, Lifehouse (most of which was salvaged for Who's Next, with the balance of tracks on the outtakes collection Odds & Sods). But with the recent deluxe edition reissue of the majestic The Who Sell Out and its oodles of bonus tracks, it seemed like a good time to come up with a reconstructed lost album.

The band apparently intended the aborted Who's For Tennis as a place-holder between 1967's Sell Out and 1969's Tommy. It's unclear what songs were planned for the record, so I devised my own playlist, drawn from various outtakes found on the Sell Out deluxe edition and other collections. Most of these songs were recorded between those two records, though to flesh things out I've cheated a bit, adding a number of songs recorded as part of the Sell Out sessions (which would have worked at least as well, if not better, on a lengthened Sell Out), as well as the silly instrumental "Dogs (Part 2)," recorded during the Tommy sessions but nicely appended here as a follow-on to the delightful "Dogs" single. I essentially ended up with a vinyl double-LP, about an hour of music.

While the album might have fallen short of both Sell Out and Tommy, with the R&B standards and Stones covers (and a few lesser Townshend compositions) sounding more like b-side fodder, it's still pretty damn great. "Glow Girl" and "Faith In Something Bigger" are among my favorite Who songs, worthy of far more than mere outtake status; while "Girl's Eyes," "Melancholia," "Little Billy" (a failed attempt at an anti-smoking commercial), "Early Morning Cold Taxi," and "Glittering Girl" (not to mention the afore-referenced "Dogs") are all classic late 60s Townshend offerings. Plus the "Magic Bus" single... yeah, it's all pretty awesome. 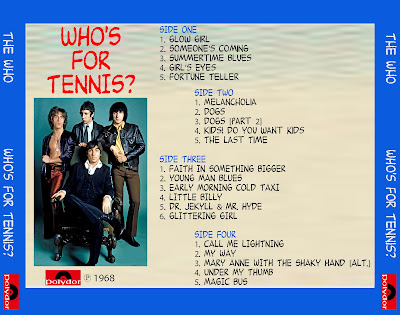 For my own CD edition, I stuck with the stereo versions of everything, which makes it sound like a cohesive whole; the playlist below uses a couple mono singles due to Spotify availability. I created the cover art using the original vinyl artwork from a rare greatest hits collection. Enjoy!