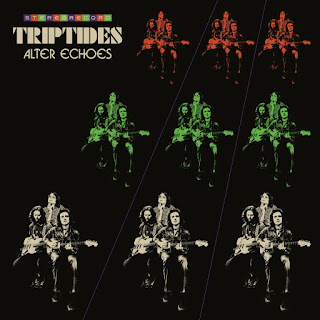 Fantastic new release for y'all today. Triptides are an L.A. trio that update jangly 60s psychedelia, a new twist on some of the 80s Paisley Underground bands like Rain Parade and the Things. I know I invoke Byrds comparisons a lot in these here parts, but it's particularly apt here, a few tunes working that classic Rickenbacker sound for excellent effect--though these guys clearly have a lot of Pink Floyd and Zombies in their vinyl collections as well.

The first handful of tracks are all straight out of the Byrds songbook; "Let It Go," for example, sounds like it belongs on the Notorious Byrd Brothers, right down to the flanged-out sonic interlude. But you've also got some variety. "Hand of Time" is an atypically upbeat garage rocker, pure psychedelic exploration with hints of Jefferson Airplane (but better); "Shining" comes across like an updating of "Breathe" off Dark Side of the Moon, nailing David Gilmour's guitar tone; "Having A Laugh" invokes 60s soft rock with its fizzy electronic piano and gentle crooning, shades of the Guess Who and Todd Rundgren; "She Doesn't Want To Know" cribs from the Zombies, circa late 60s, while closer "Now And Then" revisits the Zombies, this time the earlier R&B-flavored era.

It's a terrific little nugget, with plenty of nostalgic vibes but also oozing fresh freak-folk jangle, slotting in comfortably alongside like-minded bands like Kingsbury Manx and maybe Rose City Band.