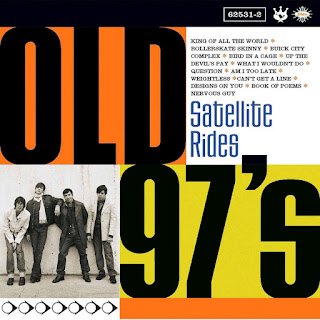 It sometimes seems like Dallas-based Americana band Old 97's don't get the attention they deserve. Ridiculously consistent, the band's released a dozen or so perfectly solid albums over the years (to say nothing of another half-dozen terrific releases from frontman Rhett Miller). My personal fave (and this can fluctuate) is their fifth album, 2001's Satellite Rides. It's got plenty of twangy country rock, but like the first couple Wilco albums also draws heavily from hook-heavy power pop and Replacements-styled raggedy, Stonesy rockers.

The ringer here is "Can't Get A Line On You" (sung by bassist Murry Hammond), a perfect, Beatlesque pop tune that stands (alongside Wilco's "Box Full of Letters") as one of the truly essential power pop numbers with only a passing resemblance to the band's more countryish roots. Opener "King Of All The World" is similarly high-energy, jangly pop, sing-along chorus and all. Sure, there's some twang to be found in tunes like "Am I Too Late" and "Up The Devil's Pay" for those who come seeking out the band's more traditional country/folk-adjacent rock, but jangly mid-tempo rockers like "Buick City Complex" and "Bird In A Cage" make this an endlessly engaging album for old Stones & 'Mats lovers who don't consider themselves Americana fans.

...and an audio rip of "King Of All The World":Here's a solo Miller performance of "Buick City Complex":