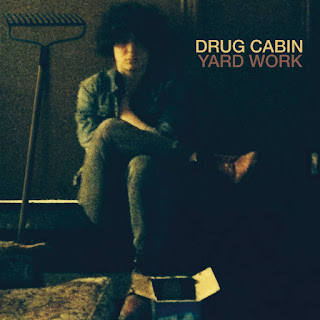 As noted previously, one of my favorite albums of the past 20 years was the 2004 debut from NYC indie rockers Ambulance Ltd., a surprisingly solid and varied collection that was an impossible-to-pigeonhole blend of Britpop and indie rock and the Velvet Underground, packed with great songs. Sadly, aside from a couple EPs, the band almost immediately splintered, leaving them essentially one of indie music's great one "hit" wonders.

Some time later, after trying to carry on with a new iteration of the band but plagued by the usual mishegoss (i.e. the record label going bankrupt as a new album was being readied), singer Marcus Congleton finally released new music as Drug Cabin. 2015's Yard Work, while lacking the sonic punch of the Ambulance Ltd. album, is nonetheless quite great, a more stripped-down, jangly affair that calls to mind bands like Real Estate, a folk-tinged pop sound best suited for quiet afternoons at home.

The record occasionally lifts off a bit more, like on the perky "Bubbles," but for the most part moves at a pleasantly relaxed pace, with charming, gentle ballads like the sleek "Baywatch" and "Goldenwall." Nice stuff, check it out at Bandcamp.

Here's an audio rip of "Bubbles":

...and a sweet live version of "Baywatch" from what appears to be a private garden party: