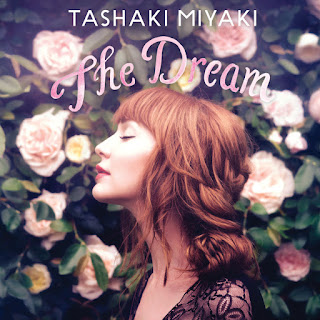 Tashaki Miyaki are a dream pop band from L.A.; they've got a new album coming out this summer, so in anticipation I've gone back to this little baby from 2017, and I'm reminded how much I love it. Atmospheric film noir torch songs, reminiscent of Mazzy Star and Julee Cruise, but with shoegaze flourishes, intermittent bursts of trippy guitar feedback from the My Bloody Valentine playbook that give the gentle ambience an infusion of riveting electricity.

"City," the opening track after a brief prelude, has a familiar minor chord progression (reminds me of the Police's "Synchronicity II," oddly enough), opening into total earworm vocals, a room-filling psychedelic epic. The follow up, "Girls on TV," is even better, a crunchy guitar riff and shades of late 80s women-fronted indie pop bands like the Darling Buds and the Primitives... and then the MBV guitar skronk really kicks in. "Facts Of Life" is another one that's got some real indie pop punch, while the acoustic guitar-based "Keep Me In Mind" is ridiculously pretty, its xylophone backing reminiscent of the Velvets' "Sunday Morning." And "Get It Right" splits the difference, a quietly loping 60s girl group ballad topped with squalls of joyous feedback.

Plenty of slow-burning headphone-friendly mellow grooves here, but the nifty hooks and carefully deployed guitar textures, and especially the warm vocal embrace of singer/multi-instrumentalist Paige Stark, make this rise far above standard-issue dream pop (a genre I enjoy but find can blend together).

Here's the "Girls on TV" video: