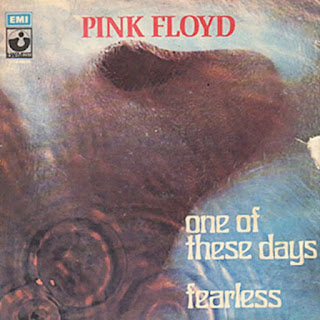 Like a lot of kids who came of age in the 70s, I discovered Pink Floyd through their run of concept albums that dominated the decade. The Wall came out in 1979 when I was 13, blowing me away with its intensity and sonic richness (though as noted previously, it's not an album I spin much these days); and of course, sitting down for 40 minutes with a pair of headphones and a copy of Dark Side of the Moon was an essential rite of passage. Eventually I started working my way backwards, both to the early Syd Barrett psychedelic pop phase and the subsequent years that found them alternating between deep space jams and more folk-tinged pop.

1971's Meddle perfectly encapsulated those two post-Barrett, pre-Dark Side tendencies. You had the side two exploratory suite "Echoes" (we'll get to that soon enough on this list), but also the shorter, catchier bits on side one. And most noteworthy of those was "Fearless." I was pretty captivated from the first listen; how did a song that wonderful totally avoid detection? I never heard it on classic rock radio (which largely stuck to the run from Dark Side through The Wall); and only the stoners and diehards in my school paid any attention to early Floyd.

Ok, I didn't care for the long "You'll Never Walk Alone" chant tacked on at the end; maybe UK soccer fans dug it, but I'd always fade it out when including the song on mixtapes. But that aside? The guitar riff is absolutely unforgettable, and David Gilmour's vocals are just enchanting. There's an amazing dynamic between the gentle verses and the building, repeated riff that I've always found riveting.

Of course, even the band seemed to overlook the track; I don't think they ever played it live. Later, of course, it would be given a second life; a lot of artists have covered it, from indie artists like Ambulance Ltd. and Mary Lou Lord, to various jam bands who have built it into their live repertoire.