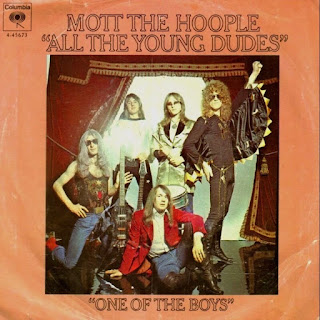 Our second cover song in just a few days!

It's hard to imagine a better testament to David Bowie's sheer genius in the 70s (I think we've already had 3 Bowie tracks on the list) then the fact that he wrote one of the most amazing songs of the decade--and then just casually gave it away to another band. Who does that?

Still, it was quite the good deed. Despite recording some fine music--I love their more folk-oriented debut, and the hard-rocking Brain Capers from 1971 was pretty solid--Mott the Hoople were on the verge of breaking up in 1972 when their fan Bowie decided to write them a surefire hit. (Apparently they'd already rejected "Suffragette City," which may say something about the artistic choices that had led Mott into such a dire spot in the first place.) "Dudes" was one of those and the rest was history moments, the song and the glam-oriented album of the same name reviving their career.

I remember hearing the song on the radio as a kid and being immediately enthralled. Its themes of young rebellion and vaguely gay overtures were lost on me, but the soaring, anthemic chorus--"All the young dudes, carry the news"--definitely felt like some sort of wake-up call, even if I couldn't put my finger on it. I picked up a cassette of Mott The Hoople's Greatest Hits on my next trip to the mall. And even if few of the tracks raised the hair on my head quite as much as that Bowie-penned hit, I loved a lot of the songs ("All The Way From Memphis," "Honaloochie Boogie," "Saturday Gigs"), and was pretty shocked they didn't have the same presence on classic rock radio.

For the longest time, I'd never heard Bowie's own take on the song (aside from a brief bit as part of a longer medley on a live Bowie album), but in recent years his studio versions, both demos as well as a more polished version he recorded in the mid-70s, have appeared on various reissues and compilations. Mott left the arrangement intact, and Ian Hunter's vocals are pretty Bowie-esque (Bowie produced the Dudes LP for Mott), so the differences are largely cosmetic; though for all my love of Bowie, I remain faithful to that Mott the Hoople version I first heard on the radio some 40 years ago.