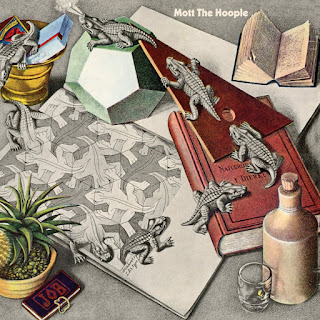 Mott The Hoople's 1969 debut is a far cry from the Bowie-abetted glam sound of their later work. Instead, it's a bit of a schizophrenic affair, half Bob Dylan imitation and half Rolling Stones imitation. And while it's a bit undercooked, with a number of covers (frontman Ian Hunter had apparently only joined the band shortly before its recording), there's a low-key, intimate vibe to it that I've always enjoyed.

The album opens with three straight covers. After a somewhat perfunctory instrumental take on the Kinks' "You Really Got Me," the band gets off a few impressive folk-rock numbers. They cover Doug Sahm's (Sir Douglas Quintet) "At The Crossroads" and Sonny Bono's (yes, that Sonny Bono) "Laugh At Me," both given a thorough Dylanization courtesy of Hunter's distinctive rasp, while sporting a sweeping, epic majesty only hinted at in the originals. The (vinyl) album side closes with a lone Hunter original, the truly great "Backsliding Fearlessly." And, yeah, they're again going for a Dylan vibe (from the lofty poetic lyrics to the Hunter vocals to the raw performance), but the anthemic chorus, driven by a killer descending bassline, takes the song to another level.

They lose a little steam on the second half, turning more to Stones-styled rock on the heavy-duty "Rock & Roll Queen" (whose riff was arguably modified by the Stones themselves for "Bitch") and resorting to a couple upbeat instrumental rockers (both perfectly fine but, again, showing a band that hadn't quite figured out their sound). Tucked in the middle is an epic, 10-minute-plus ballad that again invokes Dylan; it ain't bad, but, yeah, runs on a bit long.

Here's "At The Crossroads":