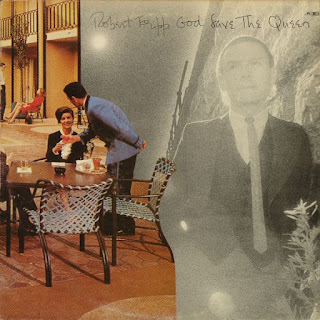 One of the strangest music purchases I made as a kid--simultaneously disappointing and exhilarating--was Robert Fripp's 1981 experimental recording Let The Power Fall. I'd recently gotten into King Crimson (largely via an appearance of the band on the short-lived SNL imitation Fridays--and was just getting into Brian Eno, whose work sometimes featured Fripp's guitars. And by then I was also deeply devoted to Bowie, who'd also worked with Fripp. 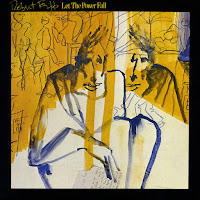 So when I saw a cassette copy of Power at the local record store, I figured I'd give it a shot, despite knowing little about its contents. It turned out to be an instrumental album of Fripp's "Frippertronics," pre-digital-sampling-era recordings created by playing electronically-treated guitar noodles, and then looping the tape over and over to craft oddly haunting, layered jams. It was a little unexpected, not an easy listen, but also totally captivating when I felt like slipping on some headphones and zoning out for awhile.

Here's a 1979 clip with Fripp demonstrating the process:

Sometime later, after arriving college, my friend Chris introduced me to an earlier record of Fripp's called God Save The Queen/Under Heavy Manners, a split LP. The Queen side featured the same solo-guitar Frippertronics found on Let The Power Fall, while Under Heavy Manners featured "Discotronics," guitar tape loops set to a beat.

The coolest part of the record, Manners' title track, had David Byrne (still at the time with Talking Heads) doing weird spoken-word vocals over the beat; it's still pretty amazing. Here's a lyric video:

These days, I don't listen to the stand-alone Frippertronics records very often; I think they sound better when paired with Eno's ambient music (as on the excellent No Pussyfooting) or when used as textural backing for other musicians' songs (most notably on the breathtaking Peter Gabriel/Robert Fripp version of "Here Comes The Flood"). Still, now and then I'll pull out God Save The Queen or Let The Power Fall and reach for my headphones for a good chill.

This LP has never been released on CD (and neither it nor Power stream), but there is (confusingly) a CD called God Save The King which pairs the two Under Heavy Manners dance-beat songs (including the Byrne-helmed title track) with additional beat-backed Frippertronics tunes.

Anyway, here's a YouTube rip of the entire Queen/Heavy LP (it starts with the Under Heavy Manners LP side):