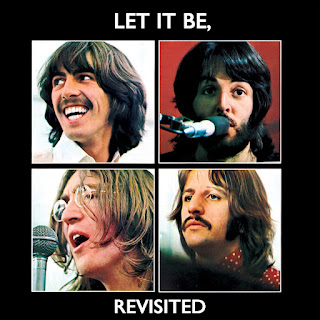 Time to kick off 2022 with an album that spent a lot of time in heavy rotation in 2021. The 9-hour Get Back documentary (on Disney+) was a gift for Beatles fans (and music obsessives), showing the tedium of the writing/recording process, the flashes of sheer genius (mostly Paul's), and the love/hate relationship among these men at the cusp of the band's dissolution.

It also helped resurrect an album that is generally considered one of their weaker efforts. And while I still find it to be a (relatively) lesser entry in their run of truly astonishing albums from '65-'70, certainly well short of Abbey Road (their final recording, though it was released before the posthumous Let It Be), I have increasingly come to love it in its own way. It's rough and messy, even more so than the sprawling White Album, but with brilliant gems amid some more half-assed yet still enjoyable toss-offs.

There are myriad versions of the record available--the original recording (produced by Phil Spector); the Let It Be, Naked version (which stripped away some of Spector's excesses and trimmed some of the studio chatter as well as live elements from the famed rooftop performance); and the alternative Glyn Johns production (which, even cleaned up from my old bootleg and officially released as part of the latest reissue package, I find pretty meh). 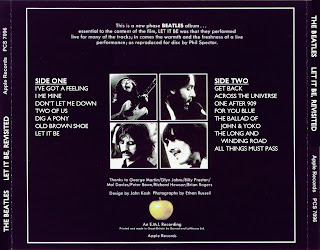 I created my own personal version of the record, culled from the various versions (mostly Naked), bolstered with the addition of a few contemporaneous songs ("Don't Let Me Down," "Old Brown Shoe," "Ballad of John & Yoko"). I also tacked on George's "All Things Must Pass" at the end--his solo version, not the Let It Be sessions demo--which makes it a bit anachronistic here, but a great closer to the record. I've re-sequenced the whole thing to give it (IMHO) better flow. You may disagree with my aesthetic choices, but give it a shot; I think it's a marked improvement over the original.