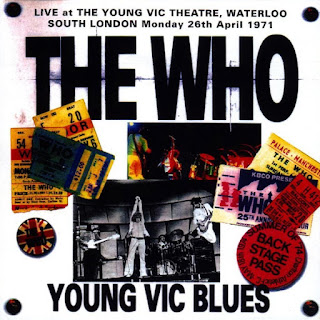 One of my ongoing pandemic projects, which I rejoined after the new year, is cleaning up my live music collection. I spent a good chunk of the '90s and '00s trading live music (first tapes, later CDRs). This was in the pre-torrenting/downloading days, when bandwidth didn't allow for accumulating live music online. Instead, I had a list of my bootleg/rarities collection posted on a website, and I'd trade shows via snail-mail with other like-minded fans, spending my weekends duplicating tapes or CDRs and running off to the post office every Monday morning with a few packages. I ended up with boxes and boxes of concert tapes, most of which, of course, I never listened to more than once.

So as part of the lock-down clean-up of the past two years, I've been adding the better-sounding (typically soundboard) recordings to my digital library while tossing out a lot of the poorer-sounding (typically audience) recordings. I'm finally up to "W" and almost done. And in listening to the dozens of Who shows I've got, I'm struck by how few decent-sounding gigs there are from the 70s, when they were probably just below the Rolling Stones in terms of being the quintessential live act. (Conversely, I've got loads of amazing, professionally-recorded performances from the last two decades of "reunion" tours, when the band (or what was left of it) was still far better than they had any right to be.)

One of my all-time favorite boots was the band's 1971 performance at the Young Vic Theatre in London. They were road-testing Pete Townshend's new material for his Lifehouse concept album project (which, of course, was ultimately aborted, with much of the material salvaged for Who's Next and the balance showing up on the Odds & Sods outtakes collection and various other releases over the years). The performance was a lot more tentative than the typical Who concert, the band feeling their way around new material rather than blasting the songs out to the rafters. And Daltrey's not necessarily in his finest voice here (kinda like those post-2000 shows). But they also played a lot of songs that never made it into their standard setlist, with rare appearances of tunes like "Pure And Easy," "Time Is Passing," "I Don't Even Know Myself," "Too Much of Anything," and "Getting in Tune." The more casual fan may be more pumped up for barnstormers like "My Generation" and "Won't Get Fooled Again," which can be found in better versions elsewhere; but for fans with countless shows on record, it's a treat hearing such an unusual setlist.

Fortunately, one needn't rely on a spotty bootleg any more, as the show was officially released on the expanded Who's Next reissue in 2003, and streams on Spotify. Now if only they'd get around to officially releasing some more shows from the vault...

Here's the Young Vic gig on Spotify (on disc 2):