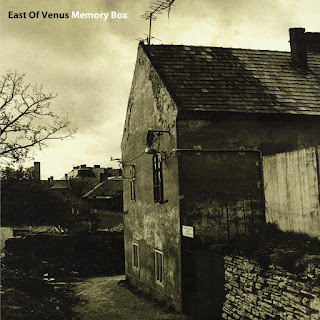 I've frequently proclaimed my undying love for Winter Hours, one of my favorite jangle-pop bands of the 1980s. Sadly, that short-lived band's music is all long out-of-print and for the most part doesn't stream, making it hard to turn people on to their magic; and the passing of heavenly-voiced singer Joe Marques at a young age meant they'd never return.

However, a quarter-century after that band's demise, guitarist Michael Carlucci assembled an indie rock supergroup of sorts, recording an album's worth of material as East of Venus with Glenn Mercer & Stan Demeski of the Feelies (the latter of whom had previously served double-duty as drummer for Winter Hours) and bassist Rob Norris of the amazing Bongos. Alas, tragedy again stepped in, with Carlucci, a much-loved figure in the NYC music scene, passing away in 2015 before the album could be released.

And it's a pretty great album, at least for those who miss that 80s college radio sound. With all respect, Carlucci isn't exactly a compelling vocalist (maybe shades of J. Mascis of Dinosaur Jr. or the late great Steve Berman of Silver Jews). Still, the music is a joy, and when the band gets into a nice guitar-driven instrumental break (like on "You Started Something"), you can close your eyes and find yourself hearing a long-lost track from The Good Earth. The album most closely resembles Shore Leave, the one-off from Feelies side project Yung Wu--a Feelies album in all but name with similarly shambolic non-frontman vocals from the band's percussionist. (And like the Yung Wu album, there are a few interesting covers among the originals, including a take on the Stones' "Citadel.")

Opener "Let's Find A Way" is an endearing blend of the players' original bands, a perfectly catchy bit of jittery jangle. Their cover of "Jane September" (from little-known indie band Red Buckets) is similarly charming, while the more electric "Who's To Know" makes no secret of the band's admiration of classic Television.

You can buy it from Omnivore.