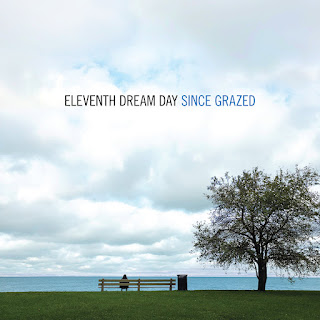 As I pore through various year-end lists for great 2021 albums I overlooked, I'm kicking myself for not picking up the latest release from Midwestern indie rockers Eleventh Dream Day sooner. 'Cuz it's a fantastic album, arguably one of their best; and, some 30+ years into their career, a surprising stylistic departure.

As noted previously, I'm a big fan of their run of early 90s records, which, like their peers in Yo La Tengo, merged post-Velvet Underground guitar scrawl with killer alt.rock hooks. They've been releasing music ever since, though they've slowed down quite a bit in recent years. Most of their subsequent records had some standout tracks, though I often found them a little too heavy on the guitar skronk and too light on the hooks. But Since Grazed is a different kind of beast... yes, there are sprawling guitar workouts, but the music is often mellower, with acoustic touches, wickedly hypnotic. There's always been a Neil & Crazy Horse vibe to their work (frontman/guitarist Rick Rizzo is undeniably the most gifted acolyte of the Young guitar solo), but they go all in on On The Beach's epic ambience here. You get the sense they've been listening to a lot of The National lately as well.

It's not all smoky epics, though; "Yves Klein Blues" and "A Case To Carry On" invoke the punchy, upbeat rock hooks of yore, probably among the best pop-ish tunes of the band's past few records. And the gentle Americana touches of tunes like "Look Out Below" and the concise balladry of "Cracks In My Smile" make for a nice bridge between the rockers and the room-filling drones.

Here's an animated video for the title track:

...and a little more animation, this time for "Just Got Home":