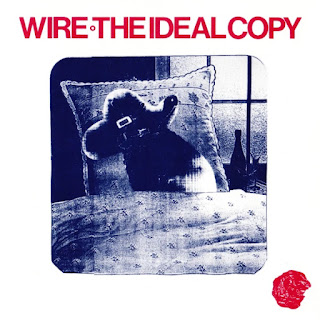 Wire were one of those bands I discovered only after the fact. My immersion in college radio in the mid-80s inevitably led me back to Wire, one of the original UK punk pioneers. I quickly fell in love with their majestic 1977-1979 three-album run (well, four if you count Colin Newman's terrific 1980 solo album, A-Z, which sounds like the natural follow-up to 1979's 154), and was sad to discover the band was no more.

So it was a real treat when they resurfaced in 1986 with a brief EP, followed shortly thereafter by 1987's full-length Ideal Copy. But rather than revisit past glories in typical reunion-act fashion, the band emerged with an entirely new sound, synth-abetted electronic pop music that sounded a lot more like, say, New Order it did than those original Wire albums. (Of course, having emerged from the ashes of Joy Division, an innovative punk originator alongside Wire, New Order could be said to have followed the same path, albeit without the 7-year interruption.)

And while the band always had a knack for inserting wonderfully catchy pop hooks among their more experimental work, there are a surprising number of infectious tunes here. Lead-off track "Point of Collapse" slips comfortably into a bubbly groove; "Ahead" is rollicking post-punk pop-rock; "Ambitious" is an insinuating, funky number, with a wicked guitar hook driving the electronic textures (while throwing out the sole look-back by name-checking early Wire rocker "12XU"); and "Cheeking Tongues," a personal favorite, is an unexpectedly goofy little slice of indie bubblegum. Of course, the light vibe pervading much of this doesn't mean the band has lost their more experimental edge. The darker "Over Theirs" may be the closest they come to building on the industrial grooves of 154 (ditto the more skippable dirge "Feed Me"); and "Still Shows," amidst its melodic slow-build, tosses in just a few shards of that same industrial energy.

The most shocking thing about The Ideal Copy, though, was that it was no mere one-off, a band on extended sabbatical with a brief flash of inspiration they decided to commit to record. The band has remained active ever since (albeit with some gradual shedding of personnel along the way), continuing to pursue the synth-pop of this record before ultimately returning to a largely guitar-based rock sound more reminiscent of their early days.

Here's the "Ahead" video: