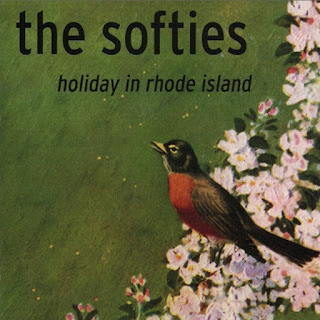 Talk about a band name that captures a musical ethos in a single word... the Softies were the epitome of K Records twee-pop, the duo of Rose Melberg (later of the excellent, slightly more rocking Tiger Trap) and Jen Sbragia. They released 3 LPs and a few singles, all conjuring up a couple young women writing sad songs in the bedroom above their parents' garage with a couple unplugged electric guitars, sweet and earnest and misty-eyed. Hey, what can I say, I'm just a big ol'... softie.

Holiday was their third and final release; I can't say I prefer one album above the others, but for some reason I turn to this one the most. Maybe it's just that opening track, "Sleep Away Your Troubles," one of those songs that makes you want to produce an indie film just so you can play it over the closing credits.

Heading into another year enmeshed in pandemic and political chaos, why not brush aside the cynicism for just a few minutes with some heartfelt sweetness?

Here's some shaky hand-held video of a rare and glorious performance of "Sleep":