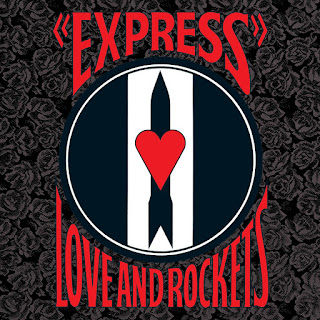 Do I listen to Love & Rockets much these days? No, can't say I do. But damn, this one was a big part of my 1986, and I do love to take it out for an occasional ride. Sounds terrific.

I wasn't terribly interested in the band at first. They were made up of 3/4 of Bauhaus (all but frontman Peter Murphy), and I wasn't a huge fan of Bauhaus' dark, creepy glam-goth (and I'm still not, though I like a little bit of their work on rare occasion). But Express, L&R's second album, had a few songs that were simply inescapable on college radio, a few true monsters that owed more to classic new wave pop than Bauhaus' goth roots.

Opener "It Could Be Sunshine," title notwithstanding, maintains some of the original band's metallic darkness, despite a perky sheen. But once the sounds of the train leaving the station kick into "Kundalini Express," we're on a whole new level. It's simply one of the most infectious songs of the era, the sort of riff you'll be humming all day (aided by a nice callback to the Stones' "Sympathy for the Devil" hoo-hoos). 35 years later and I still need to max out my speakers for this one. And it's followed by the nearly-as-great "All In My Mind," more of a mid-tempo jangly pop ballad; it stands alongside the Cure's work of that era, ably balancing the darker strains of new wave with more straightforward pop. (It's reprised later on the album by a slowed-down acoustic version, heavy on the haunting side, a riveting bit of spooky ambience.)

The balance of the album isn't quite as memorable, but there are some other fine songs; "Yin & Yang" in particular is a frenetic little gem, and the CD reissue includes a nice take on Pink Floyd's "Lucifer Sam" that plays up the witchy, goth aspects of the original.