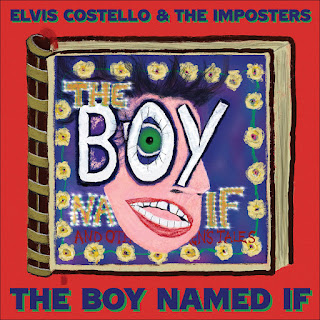 Every year or two, I'll pick up the latest Elvis Costello. Some track will strike me, and I'll momentarily consider the album to be, finally, at long last, a return to form. And then I'll put the album aside and go back to listening to that amazing run of Elvis albums from the late 70s and 80s (or, to a lesser extent, some of his solid enough 90s work).

But I'm gonna go out on a limb and say, this time I mean it! Certainly, it's the first EC album in memory where I listened all the way through in one sitting, and then immediately circled back to replay a few of the songs. Sure, there were some moments on 2002's When I Was Cruel and 2008's Momofuku and maybe 2018's Look Now where my ears would perk up and I'd feel like the Elvis I grew up with was shining through. But The Boy Named If is chock full of those moments. Not that the album is a slavish recreation of the past; but the Imposters really sound like the Attractions of yore, punchy and poppy and a cohesive band unit. And Elvis drops some of the at-times unnerving musical side-trips and crafts a fistful of solid hooks to back his always-reliable lyrics.

Opener "Farewell, OK" is a frenetic rocker that sounds like not a moment has passed since Get Happy. "Penelope Halfpenny" and "The Difference" and "The Death of Magic Thinking" are all terrific pop numbers in a classic vein, songs where I don't feel obliged to listen just to show my enduring loyalty to Elvis. And "Paint The Red Rose Blue" is the rare latter-day ballad that earns its running time. Who knows, I may be over this in a week and back to Armed Forces, but for now I'm on board.

Meanwhile, I took the opportunity to put together a mix of EC standouts since 2000. I stuck with the more upbeat full-band tracks, skipping his forays into solo pop, classical, and country music (which isn't to say there aren't moments on North and Secret, Profane & Sugarcane I enjoy despite their absence here). It came out pretty great.