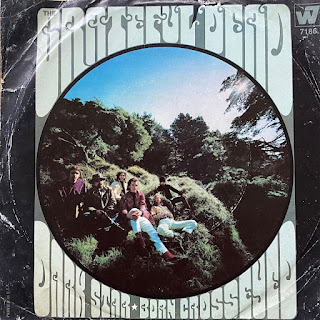 I'm not sure if this actually qualifies as a "song" in the traditional sense (or the sense I'm using it throughout  this Top 1000), but it's nonetheless the song to which I've likely devoted the most hours of my life--though not really a fair comparison, since I have countless versions scattered across my live Grateful Dead recordings, most of which run 15-30 minutes in length.

I'm guessing this is the only song on the list where I'm not talking about a studio recording released as a single or album track, but specifically the live iteration of the tune. Indeed, the studio version of "Dark Star," running at a mere 2:43, is a rather forgettable trifle, a bit of light psychedelia with a nice little riff and some wafts of ethereal vocals that serves as a mere blueprint for something far greater. (It was released as a single in 1968 and has been reissued on various compilations over the years.) But its true official release came on 1969's Live/Dead, the opening cut on the definitive document of the band's psychedelic phase. At just over 23 minutes, it's the perfect encapsulation of the Dead's 60s jams.

Those two brief verses from the single are there, somewhere, serving more as temporary moments of grounding among the extended deep space explorations. And, yeah, like much of the band's work, it benefits from hearing it in an altered state of consciousness, though this particular recording does a respectable job of inducing this state all on its own.

When I was a kid first checking out the Grateful Dead, a little afraid of what I might hear from this "druggy" band enjoyed by all the stoners and outcasts in my high school, I was a little underwhelmed; the songs on those early greatest hits collections were pretty bland, traditional rock songs with country and folk influences--music I've come to love, but not in any way explaining what all the fuss was about. But hearing the Live/Dead "Dark Star" some years later, when I was more receptive to the band, was one of those ah-hah, now I get it musical moments.

Since the Dead started opening the archives, there are dozens of official versions of the song/jam available to the masses (not counting the hundreds of performances available to tape traders and live music collectors); every 'Head will have their own favorite, the one that takes them on the most deeply personal emotional journey. (Me, I'm partial to a Miami 1974 instrumental-only "Dark Star" jam that segues into a mind-blowing "Spanish Jam" and finally "US Blues"--but hey, sorry, I'm going down rabbit holes here.) But the original Live/Dead version remains definitive, as much an essential intro to the band as more user-friendly studio classics like "Ripple."

One of my favorite "Dark Star"-related recordings comes on a 1994 project called Grayfolded, where a sound engineer mashed up a few dozen versions of the song (long before mash-ups were a thing), mostly drawn from the song's late 60s/early 70s peaks, though weaving in a few 90s versions (when it was intermittently revived after being largely dropped from the 1980s performances).
File Under: 1960s All My Favorite Songs Classic Rock Grateful Dead Jam Band Live Music Psychedelia