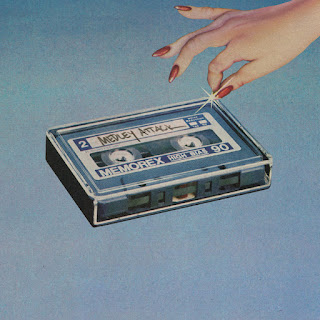 Another fine 2022 new release, this one slipped out a little under the radar earlier this summer.

And you've gotta admit, the timing wasn't ideal. Pavement guitarist Scott Kannberg dropped his latest record (his 4th under the Spiral Stairs pseudonym) just as Pavement embarked on a massive reunion tour, its first since their last reunion tour in 2011. So you can excuse the 90s indie rock fanboys for being a little too busy losing their shit over the amazing Pavement gigs to pay too much attention to a humble new release, particularly from the guy who isn't Stephen Malkmus.

Which is a shame, because Kannberg continues his streak of understated, oddball yet innately amiable indie pop. Both in Pavement and since, Kannberg got stuck in the George Harrison/John Entwistle role, a solid musician and songwriter overshadowed by a great one. And, ok, his casual vocal stylings are a bit of an impediment to frontman status. But this time around, he's embraced his vocal range, opting more frequently for a bit of a sung-spoken growl more in Dylan or Tom Verlaine territory.

And the songs are top-notch. The album opens and closes with the mid-tempo jangle-pop he's been playing since his first post-Pavement band, Preston School of Industry. But in between he covers a broader palette. There are a few tunes that go for a bit of early 70s soft-rock vibe, Kannberg dropping the post-punk Fall and Echo & the Bunnymen influences of his Pavement days in lieu of the sort of records his parents may have played--most notably on the sweet "Hey '70," which adopts the jangly world-beat of the Talking Heads' "This Must Be The Place," and the sax-abetted Television-gone-smooth-pop "Pressure Drop." "Mole" is a densely-textured, exuberant pop song, catchy and perky but still bearing the slightly-skewed stylings of his old Pavement days. There's also a really nice electric jam ambience on "Baron Please," which calls to mind the dronier grooves of post-reunion Dream Syndicate; and the more stripped-down but like-minded jam-groove of "Dry Country."

You can find it at Bandcamp.