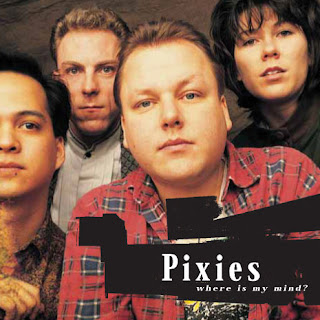 During my time at the college radio station in the mid-80s, there were a few new arrivals that led the station to a collective "holy shit!" Something new and unexpected that everyone immediately noticed as both significant and endlessly re-playable, the sort of song or album every DJ felt obligated to spin on every show for the next three months.

The Jesus and Mary Chain's "Just Like Honey" (along with the rest of 1985's Psychocandy) was one of those moments. And Pixies' "Where Is My Mind" was another.

It was slower, less abrasive than much of the balance of 1988's Surfer Rosa, the band's full-length debut (following an EP which I don't recall getting much attention until after the LP dropped). There was a simple hook, a gentle acoustic guitar strum against a piercing electric riff. The haunting Kim Deal oo-oohs in the background throughout. A dry, staccato drumbeat. And of course Frank Black's anguished wail.

The band didn't feel likely to break out of the college radio ghetto, so for some time this was one of those great secrets, a perfect song you were both sad and delighted to assume would never reach the unwashed masses. But, of course, later work did give the band a higher profile; and the song managed to infiltrate the broader spectrum through some cover versions and soundtrack appearances (most notably in that insane Fight Club finale). Still sounds stunning and humble, nonetheless.