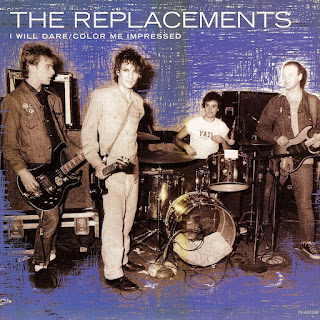 As written in these parts ad nauseum, when I arrived at college in fall '84, discovering R.E.M. was a life-changing event. My love for them, and the other jangly guitar bands that dominated college radio, was pretty instantaneous.

My passion for the Replacements took a few extra minutes to fully develop. Their earlier work, falling somewhere between the Stones and punk, was fine, but didn't move me emotionally the same way R.E.M. did. But "I Will Dare," from 1984's fantastic Let It Be, finally helped win me over.

Of course, it's a bit of a ringer--the guitar solo from R.E.M.'s Peter Buck bridged the gap between the two bands; here were the Replacements resting comfortably alongside all those other jangly bands I fell in love with. And once climbed aboard Team 'Mats, the charms of some of their harder-edged tunes were able to infiltrate. (Though it was the following year's Tim that sealed the deal.)

From a songwriting perspective, "Dare" isn't exactly Westerberg's finest moment--it's a catchy, killer pop tune that would've been all over the radio and MTV in a sane universe, but it's not a monumental indie anthem like the album's "Unsatisfied" or "Favorite Thing" or "Answering Machine" (much less Tim triumphs like "Bastards of Young" and "Little Mascara" and "Left of the Dial").

But as an entry point into the other band that so dominated my college years, it did the trick.