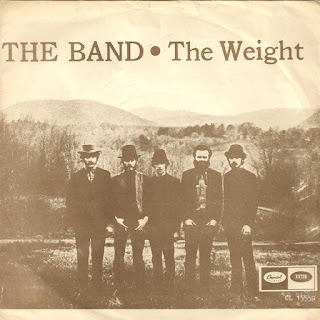 Here's another one that feels kinda obligatory. It's hard to get excited about writing up "The Weight," 'cuz it's just one of those songs you're required to include on a list like this.

Indeed, The Band are on my shortlist of artists I respect, and whose significance and greatness I don't dispute--yet I very rarely have much interest in playing their records. If they come on the radio, or when my digital library is in shuffle-play mode, great, no complaints. But when did I last sit down and listen to 1968's Music From Big Pink, where the song first appeared? I can't say.

But, still, this song's different. While the band is largely Canadian, it's hard to deny that "The Weight" may be the epitome of the Great American Song. Like I imagine a lot of people out there, I can't count how many times I've listened to it, yet I never tire of it, always finding something new and wondrous. No matter when I hear it, I have to drop everything and pay attention until the final note; it demands reverence.

The cryptic (at times absurdist) lyrics somehow sound like something out of the Old West, the images and characters feeling drawn from an old Western, even if they lack that sort of specificity; as imagery-rich poetry, the lyrics form something of a bridge between Dylan and early Springsteen. The music is simple and rustic and timeless, the blueprint for much of modern Americana. The traded vocals make it more exciting than much of what I find in the band's catalog. And of course that brief, multi-part harmony at the end of each chorus--"And-and-and you put the load right on me"--Jesus, it's just perfect.

The immortal live version from The Last Waltz, with the Staple Singers:Mavis Staples returns--this time rehearsing the song with Nick Lowe and Wilco--probably one of the most outstanding, heartwarming music clips on all of YouTube:

Oddly enough, it's yet another tune high up the list that got its moment in the sun in The Big Chill. Whether you love or hate the film (I'm a fan), it's one of the most brilliant deployments of music in cinema this side of Martin Scorsese: