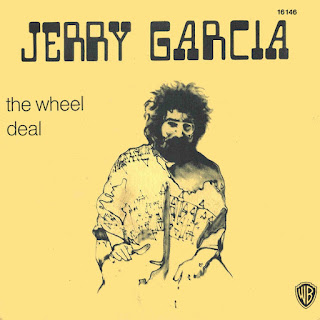 Like the previously-discussed "Ripple," "The Wheel"--first appearing on Jerry Garcia's first solo LP, 1972's Garcia--is something of an outlier in the Dead catalog. While appearing frequently in the Dead's live set over the years, it works best in its original studio incarnation. The Garcia album (which featured Jerry playing all the instruments, joined by Dead drummer Bill Kreutzman) introduced a half-dozen great songs which became Dead mainstays, and while they all sound perfectly fine on record, tracks like "Sugaree" and "Bird Song" are best experienced with the whole band stretching out on stage.

Not so for "The Wheel," a gorgeous, melodic number which (IMHO) has never translated quite as well to the concert aesthetic. Partly it's the vocal complexity, some high notes and harmonies that the band sometimes struggles to replicate; and party its the instrumentation and arrangement, some enchanting pedal steel buoying the track. (Which isn't to say there aren't some gorgeous live versions, particularly during the Donna era; I just fine it to be fully-realized in the studio, without need for the live revelation the band brings to much of their repertoire.)

The number actually opens with a bit of cacophony, chaotic guitars and piano over a repeating bassline; but once that crescendos, the songs opens up into a wide, pastoral expanse, highlighted by the lovely guitar work and Jerry's multi-tracked vocals. Lyricist Robert Hunter relies on some loose metaphor rather than his more character-driven tales, leaving the listener to decide for himself or herself what it's all about. "The wheel is turning and you can't slow down, you can't let go and you can't hold on. You can't go back and you can't stand still, and if the thunder don't get you then the lightning will." By the time the gentle la-la-la sets in at the end (a bit of a "Ripple" throw-back), your soul feels just a little more full.