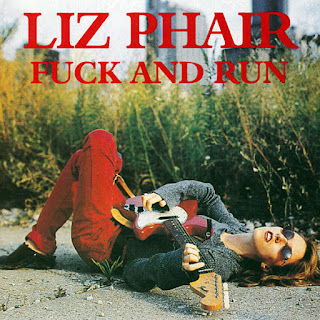 I'm a little horrified to admit that, at #63 (yeah, ok, maybe it should be #69...), this is the first contribution from a woman artist to make the list. That ratio will change as more music from the last 30 years begins to populate my Top 1000; sadly, the 60s & 70s classic rock that dominates the top slots was a lot more dude-centric. And while there are a lot of women artists and women-fronted bands I love from prior to the 1990s (whether bands like the Go-Go's, Bangles, Primitives, Cocteau Twins, and Fanny, or pioneers like Joan Jett), it was really in the early 90s that women became much more visible in the music I was listening to (primarily indie rock by that point) and my year-end best-of lists became much more evenly-divided gender-wise.

The early 80s saw acts like the Blake Babies, Bettie Serveert, and the Breeders breaking through. But of all the great albums of the era, none left a mark quite like Liz Phair's 1993 debut Exile in Guyville. I've prattled on about it plenty, both in my book and on this site, so no need to repeat myself. But that album--and particularly the stunning centerpiece "Fuck And Run"--brought gender politics front and center in a way few others attempted. And unlike 90s riot grrl acts like Bikini Kill, who made comparable statements in purer punk form, Phair tethered her uniquely outspoken and explosive lyrics to the sort of indie rock I was already listening to, making it much easier for her music to slide into my sweet spot.

"Fuck and Run" (and, no, for obvious reasons it wasn't released as a single; the art above is from a bootleg capturing an early Phair concert) is a wonder. Yes, musically it's catchy and infectious, with her distinctive, deceptively odd guitar stylings paired with a stripped-down but propulsive beat. But it's the lyrics that are attention-grabbing, an incredibly vulnerable, somewhat regretful look back at a one-night stand, the sort of emotion all but unknown in music offerings of male artists. Nobody in Guyville made music that sounded anything like this, and the ability of this song to both sadden and shock has diminished not a bit over the intervening three decades. It's one of the few songs I can recite entirely from memory; not a lot of songwriters can claim the same knack for such unforgettable lyrics. "I woke up alarmed. I didn't know where I was at first, just that I woke up in your arms. And almost  immediately I felt sorry. 'Cause I didn't think this would happen again."