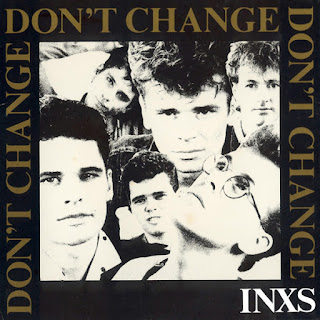 Anyway... something of an anomaly on the list. Probably the first appearance of a band I can't say I really care for aside from this one song. (Yeah, there are some novelty songs and one-hit wonders further down on the Top 1000, but that doesn't really fit the bill here.)

I mean, sure, INXS had a few decent enough singles back in the MTV era, tunes I didn't mind when they came up on the radio even if I didn't feel a need to buy their records.

But this 1982 single from the Australian new wave band is different. It's just huge. It's got a big, boomy sound, like U2 or Simple Minds, plenty of reverb. Killer guitar hook. That catchy, earworm chorus--"Don't change for you. Don't change a thing for me."

But mostly it's just an emotional reaction. It's one of those songs strongly associated with a particular time in my life. It came out smack dab in the middle of high school; and while I don't remember it getting a lot of play back then--vague memories of hearing it at a party my friend Adam and I went to in a nearby suburb, crushing on some girl I met there--somehow it stuck. Just hearing that opening synth note makes me feel like a teenager again, angsty and hormone-riddled and just kinda starting to find my way.