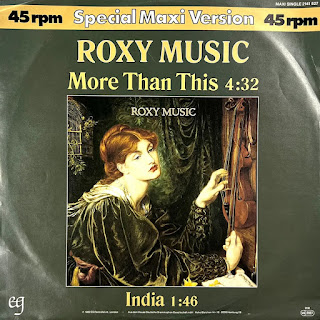 Roxy Music's final LP, 1982's Avalon, is a far cry from their earlier, more critically-revered work. And while I like the old stuff, especially the first couple records with my hero Eno, Avalon made more of an impression on me at the time. It came out right in the middle of high school, and struck me as a more "adult" sounding record than much of what I was listening to, something I could see breaking out later in life to impress people with my exquisite sophistication. And no song made more of an impression than "More Than This," the record's clear stand-out.

It's both an instantly recognizable, wonderfully catchy pop song, and a lushly-produced work of high art. Bryan Ferry's vocals have never sounded more entrancing; and sure, the synth-heavy sound has a very 80s feel, but it avoids the trap of sounding as dated as comparable new wave-adjacent hits of the day. There are any number of songs that have similar high school connotations for me, from the Go-Gos to Flock of Seagulls, yet "More Than This" seems to transcend its origins, an epic timelessness and weight to the track.

Nowadays it's become a little too ubiquitous, seemingly appearing in pretty much every film soundtrack, and is no longer the personal secret it felt like when I was a kid and everyone else was too busy with the Police and Springsteen to notice Roxy Music, but it still feels intimate to me.