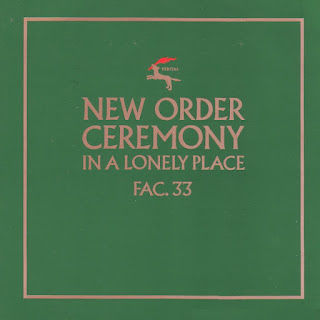 New Order's first single is the perfect bridge between Joy Division and the band that arose in the wake of Ian Curtis' suicide. Joy Division composed the song shortly before Curtis' passing--a messy live version can be heard on JD's posthumous Still collection (drawn from their final performance); and a particularly unpolished demo later surfaced on a box set. The surviving members cleaned it up for their first release (apparently they had to approximate Curtis' lyrics, which he hadn't written down and aren't entirely discernible in the surviving recordings), and it's just majestic--sad and poignant yet somehow triumphant.

The lyrics are cryptic, yet as haunting as anything else Curtis conjured during his tragically short life. "Avenues all lined with trees/Picture me and then you start watching." But the music elevates it above the darkness, a prime example of Peter Hook's melodic, chiming bassline contrasted against Bernie Sumner's jagged guitar washes, propelled by a bravura syncopated beat from Stephen Morris.

It's stunning from start to finish, heavily weighted by the suggestion of what heights Joy Division might have climbed had they continued in this direction, while uplifted by its rousing introduction of one of the '80s' most important acts.

Live in 1981:The original Joy Division demo:The enduring greatness of the song is attested to by the absurd number of cover versions. Galaxie 500 slowed it down to half-speed to mine the song's haunting atmospherics; here they are live in 1990:Here's a playlist I made of numerous versions of the song:
File Under: 1980s All My Favorite Songs Galaxie 500 Goth Indie Rock Joy Division New Order New Wave