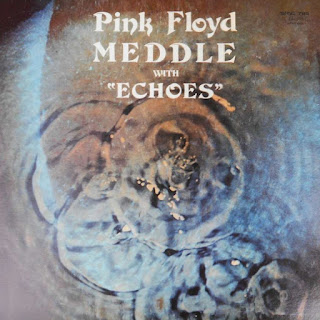 An entire LP side of headphone-friendly pyschedelic bliss, Pink Floyd's "Echoes," off 1971's Meddle, was the culmination of the band's lengthy space-rock explorations, an impressive peak that closed off an era as they pivoted into the following decade's more narrative concept albums initiated by 1973's Dark Side of the Moon (setting aside the brief detour into 1972's Obscured By Clouds soundtrack).

Unlike some of their earlier-jam based tracks, live staples like "Set The Controls For The Heart Of The Sun" and "Saucerful of Secrets," "Echoes" worked hard to earn its running length, an endlessly intriguing balance between trippy weirdness (the eerie repeated ping that kicks of the song and then returns amidst a delirious cosmic stew midway through the 23-minute piece); melodic folk rock (the brief verses featuring gorgeous intertwined harmonies from guitarist David Gilmour and keyboardist Richard Wright, a standout feature of the band that sadly vanished after Dark Side); and compelling this-band-can-rock jams (Gilmour & Wright kicking loose after the first verse; check out the stunning 2006 live version below). Whereas the comparable side-long title suite from 1970's Atom Heart Mother felt like a few sketched-out ideas patched together into a bit of a mess, "Echoes" is compelling from start to finish, a unified whole that's hard to appreciate without sinking deep into the couch for its complete running length. Something I've done more times than I can count.