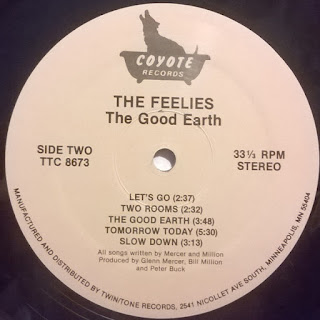 Is it too much to have not one but two Feelies songs from the same album, 1986's The Good Earth, before we've even reached #100? Dunno. But I've probably played that album more than almost anything else in my collection, so it feels (Feelies?) just fine.

Not the most substantial of songs--three chords, a couple lines of lyrics; post-Velvets indie folk-rock at its most basic. But the tone of that dual-guitar jangle is what the guitar on every song oughta sound like. I mean, the sound on this ditty is just immaculate. (Hat-tip to R.E.M.'s Peter Buck for production duties.) And much like "New Slang" yesterday, this was one of those songs I put on pretty much every mixtape for years and years. Oh, you've never heard The Feelies? Well, check this song out, it'll change your life, I swear...

Live in 2014:Also... as used in The Squid & The Whale:
File Under: 1980s All My Favorite Songs College Radio Feelies Indie Rock Jangle Pop