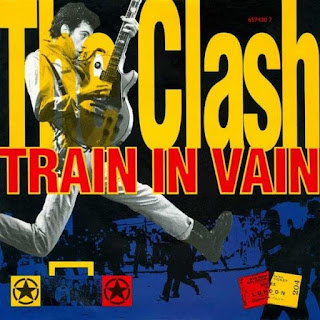 In 1979, I was in the eighth grade. I'd begun the transition from the Top 40 AM radio stations that had first roped me into music to the classic rock stations on the FM dial, digging deep into rock's past. I tried to stay current as well, but in the pre-MTV, pre-internet era, I was pretty much limited to whatever penetrated the bubble of Chicago's rather pedestrian radio stations. You'd hear murmurs about "punk" and the then-emerging new wave bands... maybe some Elvis Costello or Joe Jackson or Devo would sneak in, or the Ramones' sugar-coated "I Wanna Be Sedated." But the Clash hadn't yet broken through, and pretty much all we knew was that they were one of those scary English bands like the Sex Pistols.

So when "Train in Vain" hit the radio, it came as something as a surprise. It was pure, unadulterated pop music, a friendly and approachable classic break-up song with a killer hook. THIS was what people were so nervous about?

I picked up London Calling--which didn't get a US release until early '80--and of course loved it (as noted elsewhere, it remains my absolute favorite album to this day). Sure, few songs were as blatantly commercial as "Train," but songs like the title track and "Death or Glory" and "Spanish Bombs" and "Rudie Can't Fail" were all insanely catchy and wonderful and so much more exciting than most of what I was hearing on the radio. And of course it sent me looking backwards, discovering that their earlier work, for all the hushed-tone fear of "punk" in my suburban enclave, was simply great rock music with a more aggressive edge, musically and lyrically.

I assumed that fans of the band's debut were put off by the Mick Jones-helmed radio-ready pop of "Train In Vain"--a song tacked on at the end of the double-LP and not even listed on the jacket, and given a title unrelated to the lyrics which made it all that much harder for single-seekers to track down--but it was the perfect way to open the door to newbies (like 13-year-old me) who might have otherwise been put off by the band's mythos. And once that door was opened, everything else came flooding in.

Live in 1980:
File Under: 1970s All My Favorite Songs Clash Classic Rock Punk