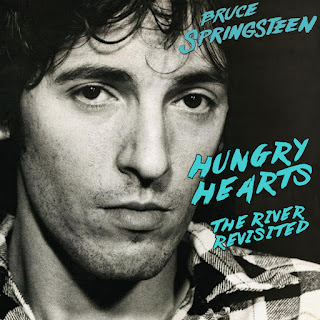 Time for another reconstructed, imaginary album...

My love for Springsteen has always run hot & cold. As a kid first discovering classic rock in the 70s, I was a big fan of Born to Run and Darkness on the Edge of Town. Especially the latter. I remember one summer at overnight camp, one of my counselors cranking up "Badlands" and "Candy's Room" and "Adam Raised A Cain," partly to piss off another one of my counselors who truly hated Bruce.

But by the time The River came out in late 1980, my interest was fading. I started high school that fall, and my taste was evolving towards new wave and more contemporary-sounding music. Plus, the end of 1979 and beginning of 1980 had seen the arrival of a couple other cultural-landmark double albums--London Calling and The Wall--and as I moved into the fresher, more rocking aspects of the former and the more headphone-friendly intensity of the latter, Bruce just felt like part of the past to me.

1984's Born In The U.S.A. would put a nail in the coffin, at least for the time being--its omnipresence turned me off, and again the timing couldn't have been worse: it dropped the summer before college, on the cusp of my discovery of college radio and R.E.M. and the Replacements and all the other bands that changed the trajectory of my (musical) life, and Bruce was not a part of that. (Over the past decade, I finally went back and checked out his post-U.S.A. albums, and have found a treasure trove of outstanding music.)

But my lukewarm feelings for The River weren't just a matter of timing; I still liked his music in 1980. The double album was just too overlong and sprawling. Even when I'm in I-love-Springsteen mode, I have a limited attention span; there's a sort of sameness I find in a lot of his music, even the best of it. (Hell, I'd probably cut a bit out of Born to Run and Darkness.) I've got countless live Springsteen shows, and they're invariably fantastic, but in 20-minute chunks; his epic concerts feel more like a bug than a feature to me.

Still, I've often wondered if I might have more appreciation for The River if it were just a little more focused, giving the undeniably killer tracks more room to shine and carving out some of the slower and more repetitious slogs.

So I put together an alternate version of the record, renamed Hungry Hearts. 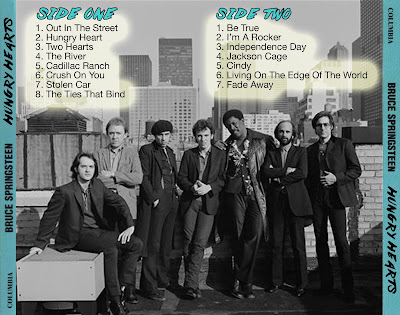 There's too much great music to pare it down to a proper 40-minute single LP; but I trimmed it to under an hour. That mostly meant cutting out some of the ballads, which, for all their lyrical richness, always had me reaching for the skip button. Goodbye, 8-minute "Drive All Night"! Sorry, kinda maudlin "I Wanna Marry You." Some of the upbeat tracks also get jettisoned. "You Can Look" felt too much like a retread; and while I really like "Sherry Darling," I've always found the faux-live recording, with background audience noise, a little distracting in the context of a studio album--better to save it for the live sets. ("Ramrod" was a tougher call, but ultimately was another one I thought better suited to those live releases.)

But I also swapped in a few tracks from the 4-CD River collection box set released a few years ago. I substituted earlier versions of "Stolen Car" and the title track, both of which were a little punchier in their original incarnations (planned for an aborted 1979 album, The Ties That Bind, which he dropped in favor of the denser River). I also added a couple Ties That Bind tracks omitted from The River that needed rescuing from the cutting-room floor, the melodic mid-tempo "Cindy" and especially the poppy "Be True," which Springsteen later conceded should never have been cut from the official release.

I mostly avoided the box set's disc of additional outtakes, figuring I'd save them for another imaginary album project down the road. But I did throw in "Living On The Edge of the World" because I needed a lightweight party track to replace "Sherry Darling," and figured something more unfamiliar would spice up the playlist.

Diehards will likely find all of this blasphemy, but with a more manageable and better sequenced album--how could he have considered anything besides "Fade Away" as an album closer?--I figure I'll at least listen to this one.