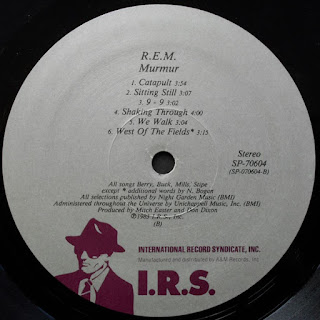 As I've blathered on endlessly about in this space (and in my book), R.E.M.'s 1983 debut was a true life-changing experience from me. And while I remain captivated by every note, from the opening rallying cry of "Radio Free Europe" to the closing anthem "West of the Fields," when the dust settled, I think it was side-two opener "Catapult" that struck me most on an emotional level.

Lyrically it's a little slight; and like much of their earlier work, the words are often indecipherable (and those that get through I probably have wrong). But the few that penetrated here penetrated deep. "We were little boys... We were little girls... Did we miss anything?" It seemed to perfectly encapsulate why discovering R.E.M. as a college freshman in 1984 was such a demarcation point, opening up a world of indie music that had escaped me in my childhood. Did I miss anything? Apparently I had.