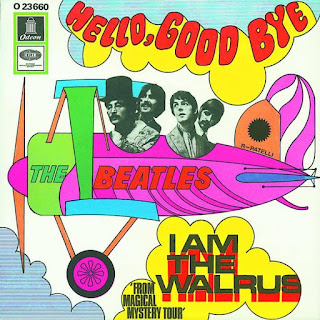 As promised, we managed to go more than a month without any Beatles crowding the list... and after this there are just a few more randomly scattered throughout the Top 1000 (yeah, there should rightfully be dozens, but how boring would that be?).

Incomprehensibly to me, "Hello Goodbye" (much like "Hey Jude") seems to draw the ire of a lot of  Beatles fans. And, ok, it's not exactly one of Paul's deeper lyrics; or, for that matter, a very groundbreaking piece of music (certainly in the shadow of Sgt. Pepper from earlier in '67). But as a perfectly-constructed pop song, with an all-hands-on-deck exploration of the studio (how the hell did they do this with just 8 tracks to play with???), it's a sonic wonder.

0:00--A cold open launching straight into the first verse; none of this dicking around with dull introductions.

0:08--Barely 10 seconds into the song, and already a cool descending bassline from Paul, followed seconds later by a quick slash of Harrison slide guitar.

0:21--The first chorus (again, not a second of fat--the chorus is already here!), and I love that guitar riff.

0:38--Next verse. Amazing how they get every component of the song to sound distinct (kudos to George Martin I suppose?)... Paul's double-tracked voice, the snare, the guitar, the piano.. it's so damn clean. You could close your eyes and listen for just a single instrument or voice and follow it all the way through the song, no clutter or bleed-through.

0:59--Second chorus, this time with harmonies. Any other band would just repeat the chorus; hey, it's a fine, perfectly catchy chorus. But, no, it's the freakin' Beatles, let's have call-and-response multi-part vocals to mix things up. Beautiful.

1:16--Now we get the third verse, but this time it's mostly instrumental, and all hell breaks loose. Like "Rain" and "A Day In The Life," Ringo again proves why he's such an underrated drummer--totally restrained, the empty spaces as noticeable as the actual beats. With some trippy echo-chamber Paul vocals to remind us we're knee-deep in the psychedelic era.

1:54--Fourth verse, and this time the call-and-response harmonies shift out of the chorus and into the verse. Paul, John, and George bring the vocal magic as Ringo lets loose with another one of those amazing snare bits of his.

2:10--Wrapping up the verse with Ringo on fire, and one of those quick Paul bass triplets that make me lose my shit.

2:36--Nifty little descending Paul vocal to close out the song; again, not an ounce of fat, a perfectly little 2:43 pop song bids us farewell in style.

2:45--Wait; they're back! Ok, false endings, always a risky gimmick. And they'd already fooled us once with "Strawberry Fields Forever." But they earn their return, another 45 seconds of joy, the band sounding like they're having the best time ever. Especially in the video (hula dancers; hey, why not?). And oh, yeah, I do love that video--putting those Sgt. Pepper uniforms to good use (even if only Paul seems engaged and the rest of the boys look eager to get the hell out of town).