Counting Down (Well, UP) My Favorite Songs: #1 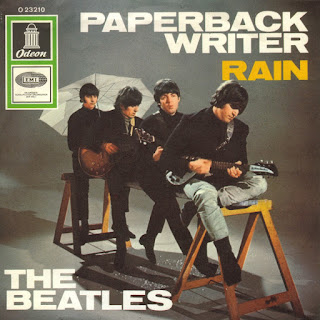 Just got back from a long break... first the dreaded Covid (fortunately the double-booster kept it to little more than a very mild cold), then a couple weeks of summer travel. And I suppose I could start up again with the album picks... but, as should be clear from other recent posts, I'm a little tired of it. I've written up over 800 records here, and while I've got thousands more in my collection, I'm facing diminishing returns here. So I could just stop and call it a day, add relegate this blog to the dustbin of history like so many others... but I still like the exercise of forcing myself to write a little bit every day.

So without further throat-clearing, here's my favorite song of all time: The Beatles' "Rain," from 1966.

Now, obviously it's gonna be a Beatles song. I could make my Top 20 all Beatles songs. (But I've tried to show restraint and keep the repetition to a minimum... although we're gonna hit a number of them along the way, still hogging a lot of the top spots.)

The harder question... why "Rain"? I admit it's not an obvious choice. It's a B-side (to the pre-Revolver "Paperback Writer" single), never included on a proper LP, and (insanely) not even making the cut for the 1962-1966 "Red Album" collection. Indeed, while I probably heard it on the radio at some point in my childhood--the Chicago classic rock station used to have annual Beatles A-Z weekends where they played every Beatles song in alphabetical order, which is how I discovered a lot of Beatles music before I had the budget to buy the albums--I didn't actually own the song, and really discover it, until the Past Masters compilation CD came out in 1988.

Perhaps it's that relative rarity, and late discovery, that's partially responsible for my undying love of the song. By high school I was a diehard Beatles fanatic, intimately familiar with most of their music, but it wasn't until the end of college that I finally had the opportunity to really hear the song. It was almost like hearing a brand new Beatles record, some 18 years after their-break up... something that wasn't part of the oldies catalog that felt a little overplayed by that point in my life, but a truly "new" piece of music.

Which isn't to say it isn't an incredible song on its own merits. Maybe not their "best" song (we'll get to that one soon enough), but damn near perfect. The tune is incredibly infectious, and while not lyrically deep, it sticks with you. The guitars are a stunning wash of psychedelic jangle. Lennon is in fine voice, and the harmonies strategically deployed. Ringo's drumming has never sounded better... this track alone belies the myth that Ringo was somehow a lesser musician than the rest of the band. And of course you've got the tacked-on backwards verse at the end, inspired by Lennon accidentally playing the rough mix backwards while stoned late at night.

There are a lot of Beatles songs I can (and have!) play a million times and never tire of, but this one is somehow just a little more worthy of repeat plays than anything else.

File Under: 1960s All My Favorite Songs Beatles Classic Rock