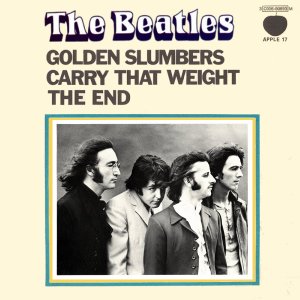 Yeah, I know, it's a bit of a cheat, counting three songs as one. But the medley of "Golden Slumbers/Carry That Weight/The End" that closes out the impeccable Side Two of 1969's Abbey Road (brief "Her Majesty" coda aside) really serves as a unified suite, a melange of incomplete song snippets pieced together by McCartney .

Obviously, the suite is full of magical musical moments--the beautiful opening balladry of "Golden Slumbers"; the portentous, anthemic chorus of "Carry That Weight" (and its thematic call-back to "You Never Give Me Your Money," which is probably the better starting point for the Side Two medley); the rousing guitar battle among McCartney, Lennon, and Harrison.

But all of that is subsumed by the hefty, bittersweet emotional impact of the piece, which serves as a farewell to the greatest rock & roll band that ever was. (Yes, Let It Be was released the following year, but it was recorded before Abbey Road, so this really was the end (The End) for the band. Making Paul's closing proclamation--"And in the end, the love you take is equal to the love you make"--more than just a bit of wide-eyed peace-and-love musical fluff, but a stunning eulogy for both the Beatles and the 1960s.

Here's Sir Paul performing the medley live in 2009 with an all-star cast (including Eric Clapton and Mark Knopfler filling in on guitar):
File Under: 1960s All My Favorite Songs Beatles Classic Rock Paul McCartney